As we gear up for another round of bargaining later in the year, we scored a significant victory for San Joaquin County chapter workers. At the January 11, 2022 meeting of the San Joaquin County Board of Supervisors, it was approved that there would be a one-time COVID-19 payment for qualifying employees, totaling up to $1,000 each.

The payment will be included on your February 18, 2022 paycheck.

Part-time workers are eligible for a one-time payment of $1,000 if they worked 1,041 or more hours, while part-time workers who worked between 500 and 1,040 hours qualify for $500. That is only possible because, through the power of our union, we lifted the cap on part-time workers’ hours last year. We can win more material victories like that and more as we enter into bargaining later in the year.

We know that working through a once-in-a-century worldwide health pandemic has made our work all the more essential. COVID-19 has laid bare injustice, inequality, and indifference to human suffering. However, San Joaquin County chapter workers have been on the frontlines since the very beginning, fighting for our communities. We know the work that must happen to deal with COVID-19 must be collective work. That is why being part of a union, a movement focused on labor, and working-class people everywhere, is the answer.

We make San Joaquin County safe for everyone.

We are San Joaquin County.

If someone worked during that time period but stopped working on August 8 but is now working again, would they qualify?

As long as they are an SJC employee at the time of payment issuance, they would receive the payment based upon regular hours reported. There would be no “hours reported” from August 8 to the return to employment.

The scenario referring to a temporary employee is a part-time/temp assignment through the county. That counts as county employment under the part-time status and would use regular hours worked to determine eligibility.

If someone is employed by the county and worked during the listed time frame, but is on unpaid LOA currently, would they qualify?

The county did not distinguish if someone was on unpaid leave, the unpaid leave just would not count as reported regular hours.

If someone is employed by the county and worked during the listed time frame, but is on paid LOA currently (collecting a paycheck by using the 41 hours each pay period), would they qualify?

The payment is based on regular hours reported, sick leave would count as regular hours. For example, if an employee is on a paid LOA, their regular hours would be counted; unpaid LOA is not eligible. 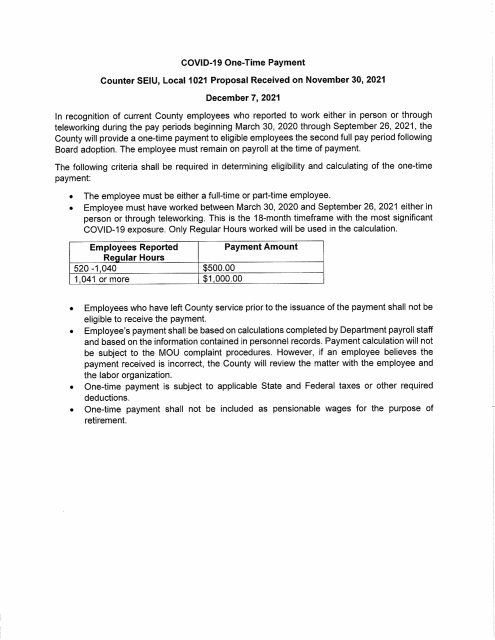