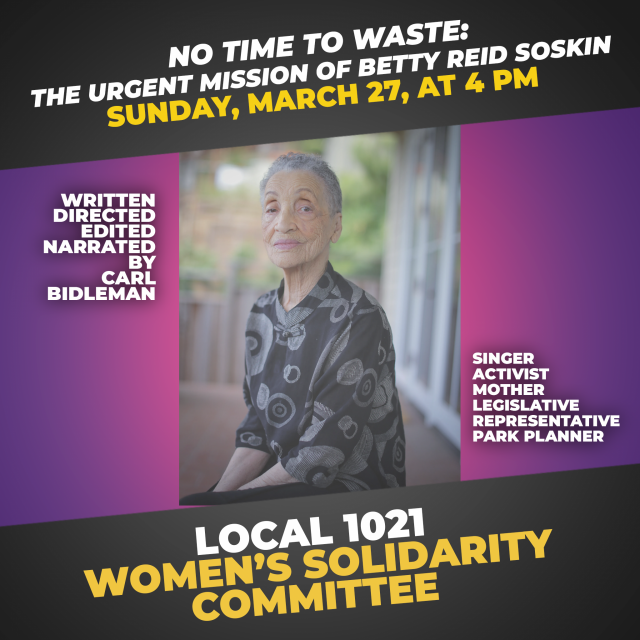 Join the SEIU Local 1021 Women’s Solidarity Committee on Sunday, March 27, at 4 pm for a special film screening of the biographical documentary film, No Time To Waste: The Urgent Mission Of Betty Reid Soskin. The film celebrates the legendary life of one-hundred-year-old park ranger Betty Reid Soskin’s inspiring life, work, and urgent mission to restore critical missing chapters of America’s story. The film follows her journey as an African American woman presenting her personal story from a kitchen stool in a national park theater to media interviews and international audiences who hang on to every word she utters.

“The documentary captures her fascinating life,” in a statement released by the SEIU Local 1021 Women’s Solidarity Committee. “Her life is extraordinary from the experiences of being a young Black woman in a segregated union hall during World War II, through her multi-faceted career as a singer, activist, mother, and park planner to her current public role. At the Rosie the Riveter World War II Home Front National Historical Park, Soskin continues to illuminate the invisible histories of African Americans and other People of Color. Her efforts have changed how the National Park Service conveys this history to audiences across the U.S., challenging us all to move together toward a more perfect union.”

The link to the film will be here. The password to view the film between Saturday, March 26 to Monday, March 28 is S3b377!