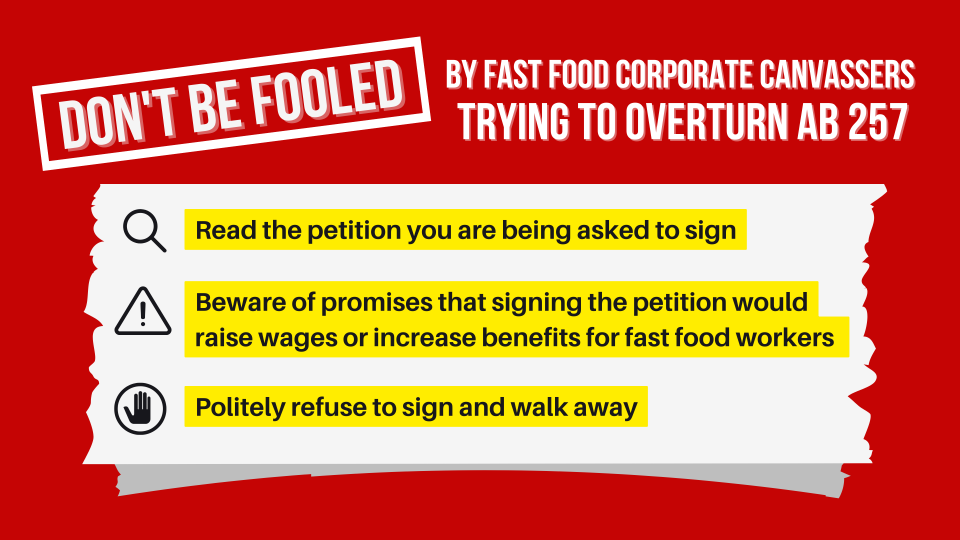 After fast-food workers and SEIU members across California rose up in the fight for dignity and respect on the job, California Governor Gavin Newsom signed AB 257, the Fast Food Accountability and Standards Recovery Act or FAST Recovery Act, into law. AB 257 protects and empowers California’s five-hundred-fifty thousand fast-food workers, the vast majority being Black and Latino – with a seat at the table to help set minimum industry standards around wages, safety and training. The passage of AB 257 marks a historic victory in fast-food workers’ decade-long fight for fair pay and a voice on the job. Our fight is not over.

“In their fight for a voice on the job through AB 257, Black and Latino fast-food workers stood up to the wealthiest corporations in the world — and they won a landmark victory for working people everywhere,” said Mary Kay Henry, the international president of the Service Employees International Union. “Now, in an act of extraordinary greed and cowardice, fast-food corporations are looking to buy their way out of a law intended to lift pay for their workers, ensure their stores are safe and healthy and improve the industry for everybody.”

Canvassers paid by billion-dollar fast food corporations like McDonald’s and Burger King are collecting signatures to try overturning AB 257 through a referendum. Unsurprisingly, they are using deceptive messaging to lure voters into signing their petitions. Don’t be fooled. DO NOT sign petitions supporting this corporate-backed referendum effort. Don’t let McDonald’s buy themselves an exemption from following the law.

“The proposed referendum on AB 257 is nothing more than a thinly-veiled attempt to silence more than half a million fast-food workers in California and intimidate workers everywhere from demanding a seat at the table.” Henry continued. “This isn’t how companies act when they’re proud of their business model. It’s how they act when they’re terrified of their own workers and the power of collective action.”

At the same time, fast-food workers across the state are speaking out against this corporate power grab. Fast-food workers are organizing and gathering more signatures to set up the Fast Food Council, which includes workers, government officials, and industry representatives, as required by AB 257.

“Instead of fueling a race to the bottom in fast-food, McDonald’s should lead the way toward a future in which workers, franchisees and corporations work together to address the most urgent issues facing the industry,” Henry went on. “If McDonald’s actually wants to support communities of color throughout California, it should drop its support for this misguided referendum and listen to the workers and consumers who fuel its profits.”

SEIU 1021 members across Northern California must continue to stand with fast-food workers who have fought courageously to have a seat at the table.