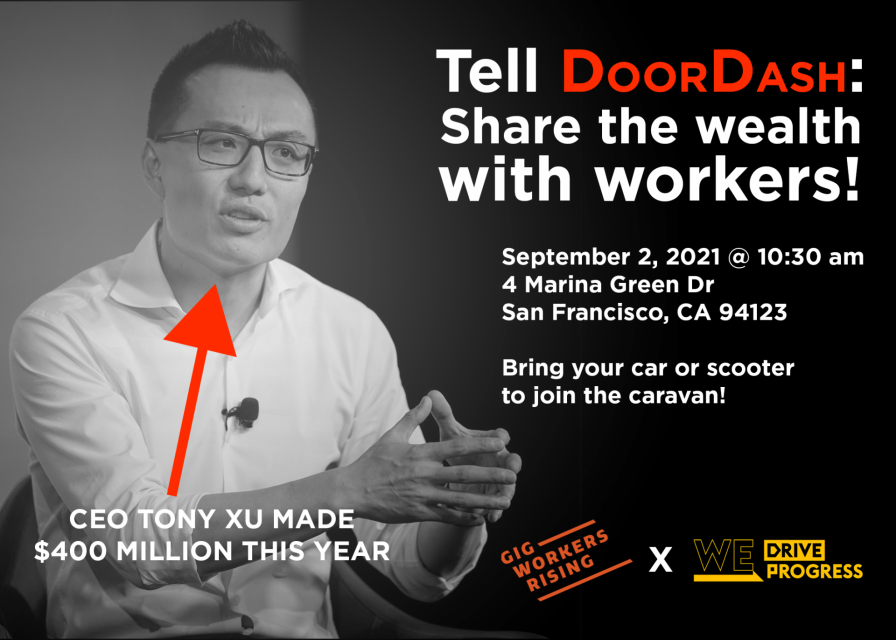 Deemed essential workers, delivery drivers working for DoorDash have faced unfair and exploitative working conditions throughout the pandemic. Workers are expected to make several deliveries at once for low pay – two deliveries, requiring four separate stops at restaurants and individuals’ homes often pay as little as $12-$15 with no compensation for gas money, parking, or vehicle upkeep. DoorDash delivery drivers are ruled by ratings from their customers, how many deliveries they accept, and how many deliveries are completed. If these ratings dip too low or if there’s a customer complaint – substantiated or not – delivery drivers can be automatically moved to the back of the line for deliveries (resulting in a loss in earnings) or can even be deactivated immediately and without recourse. Drivers who have found mistakes in their ratings and have contacted DoorDash for support have been told nothing can change the error.

During a worldwide pandemic and while performing a job that requires entering restaurants, apartment buildings, homes, and interacting with many people, DoorDash workers have received little to no safety support. Some DoorDash workers have reported being reimbursed as little as eighty cents per day for cleaning/sanitizing equipment and PPE that they use to keep themselves and customers safe. The DoorDash app is completely lacking in transparency around delivery driver earnings, tips. Whether the Proposition 22 requirement of one-hundred-twenty percent of the minimum wage during active time is being met, leaving workers hustling to make ends meet Meanwhile, DoorDash CEO Tony Xu was reportedly the highest-paid CEO in the Bay Area in 2021, earning $400 million in 2021 alone.

Ryan G., a We Drive Progress food-delivery worker for DoorDash since January of 2021, speaks about why he is participating in an upcoming action against DoorDash CEO Tony Xu on September 2, 2021.

“At a time when gig workers were suffering enough, here comes COVID-19 and Proposition 22. We, the workers, make these app-based companies successful. DoorDash CEO Tony Xu earning $400 million in 2021 alone is sickening, particularly when his workers can easily come down with COVID-19 by going into restaurants with zero protection provided by the company.

What makes matters worse is that we “Dashers” have lacked transparency on tips, earnings, and whether we make one-hundred-twenty percent of the minimum wage, as required by Proposition 22.

We’ve also been deactivated or seen acceptance scores lowered unfairly — meaning fewer deliveries for less money. And, despite working during a global pandemic, we haven’t received enough of the kind of protections others have: protective equipment, sick leave, health care benefits, and more.

On September 2, we are taking our recent victory from the California superior court to the streets of San Francisco to demand that Tony Xu share the wealth that we created with his workers.

We are united in our resolve for dignity, respect, and a union on our bikes, scooters, and in our cars, not only for us working for Tony Xu’s DoorDash and other app-based companies but for everyone else. If we fail in taking on these multibillion companies with their multimillion CEOs, that will spread to other sectors of the economy, which will cause the kind of terrible conditions we’ve been facing in gig work.”

At 10:30 am, on September 2, join gig workers from We Drive Progress and Gig Workers Rising at 4 Marina Green Dr, San Francisco, CA 94123. We are taking our victory from the courts straight to DoorDash CEO Tony Xu. Sign up here for updates.