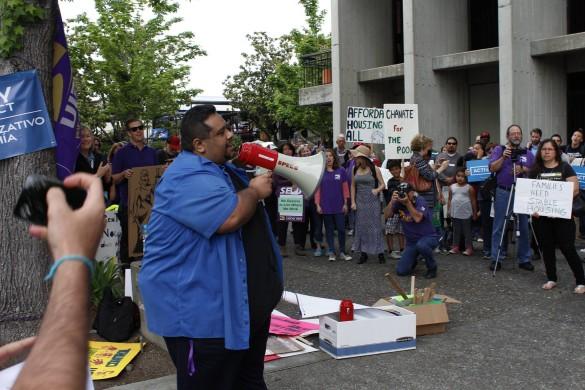 The housing crisis that began in San Francisco several years ago and spread to the East Bay, has moved north to Sonoma County. And with it so has a collective resistance to the speculation and greed pricing people out of the communities they have long lived and worked in.

The situation has gotten extreme. Nearly half of Santa Rosa’s renter households are “overpaying households,” meaning they pay more than 30% of their income on housing. The monthly rent in apartment buildings with 50 or more units has increased 9% over the last year and more than 20% in the past 2.5 years. And the region’s low 1%vacancy rate  has made it nearly impossible for evicted residents to find another place to live in the area.

After many months of organizing, marching and lobbying, a coalition of community, tenant, senior and faith groups, along with SEIU 1021, forced the issue onto the agenda of the Santa Rosa City Council, Sonoma County’s largest city. The question: should the city enact an ordinance limiting rent increases and establishing “just causes” for evictions.

On Tuesday, May 3 a couple hundred supporters of the proposed “Rent Stabilization Ordinance” before the City Council gathered outside the Council Chambers, rallying for their cause, including some 80 students from Santa Rosa Junior College who had marched from campus to the site.

Omar Medina (pictured), an SEIU 1021 member and president of the North Bay Organizing Project (NBOP), the coalition leading the community push for the rent ordinance, opened the rally with a chant that carried through the building walls and reverberated in the Council Chambers: “Fight! Fight! Fight! Housing is a right!”

Medina went on to warn the assembly that the real estate industry will try to undermine whatever tenant protections the Council might pass.

“Be vigilant and keep up the fight,” he exhorted them.

Tenants, students and seniors took turns at the bullhorn, telling their housing tales. Ronit Rubinoff, Executive Director of Legal Aide, said in her 20 years as a tenant attorney she had never seen as many evictions as now. She said no matter what the Council passes, it will still be up to tenants to enforce the law.

“Know your rights and assert them,” she said.

The crowd then filled the Council Chambers and, along with landlords, participated in several hours of public testimony.

In the end the Council voted 4-3 to direct staff to draft a rent ordinance that would cap rent increases at 3% per year on apartments built before 1995 and be retroactive to Jan. 1, 2016. It will exempt duplexes and triplexes if a property owner or family member lived in one of the units.

The ordinance will include a just cause eviction policy covering all rental properties in the city. It would allow landlords to evict renters for a number of reasons, including a “habitual” nonpayment of rent, creating a nuisance or to withdraw the apartment from the market. It would also allow temporary removal of residents for capital improvements.

A companion measure to place a moratorium on rent increase of more than 3% for 45 days while city staff drafted the ordinance was presented as an “urgency ordinance” since it had not fulfilled notice requirements under the state’s open government law. That meant it needed 5 of 7 votes from the Council. Proponents could only garner four votes so they will bring it back at the next council meeting.