As the City considers layoffs at 49 S. Van Ness, custodial and security workers are organizing to put pressure on GSA and protect their jobs 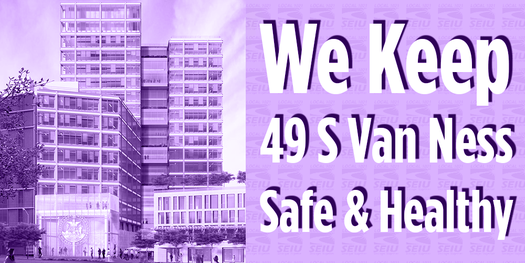 When the City and County of San Francisco opened a new building at 49 S. Van Ness, to be managed by the General Services Agency, we knew how important it would be for custodial and security services to be brought in house. Having permanent, union civil service workers cleaning and protecting the building would mean having dedicated public servants safeguarding the health and wellbeing of everyone working in the 16-story high rise that provides permits to the public, hosts multiple departments, and houses hundreds of City workers.

The GSA originally had plans to subcontract custodial and security services using a Prop J contract until union intervened and GSA agreed to hire City workers for the work, with some subcontractors to supplement services. Now, GSA is going back on our agreement and is once again threatening to destroy good, union jobs by outsourcing our work entirely.

“They didn’t like it that they had to hire us rather than privatize these jobs from the get-go but having dedicated, hard-working, permanent civil servants do this work is a huge difference compared to privatizing these jobs. We take a lot of pride in protecting the health and well-being of everyone in this building. I get approached by people all the time who work here who tell me how much they love and appreciate our work and how safe they feel with us around,” said a Building and Grounds Patrol Officer who has been working at 49 S. Van ness since last August but was afraid to speak publicly for fear of retaliation. “Both my parents were civil servants and so are all of my siblings. Many of us left really good jobs to come here, knowing that it was a temporary exempt position but seeing it as a foot in the door since many of us are on the civil service list already. Now they’re pulling the rug out from under us. The one bright spot has been seeing all the support we’re getting from our fellow SEIU 1021 members, as well as other unions like IFPTE 21, Teamsters 856, IAFF 798, and more. San Francisco is a union town, and this building is filled with union members. They think they can outsource our jobs? Absolutely not.”

By attempting to subcontract this work, the City is unnecessarily jeopardizing the health and safety of the public and all the City workers who work at 49 S. Van Ness. Since its opening, our union’s dedicated custodians have been disinfecting and deep cleaning constantly to protect us from the spread of the COVID 19 virus, and security personnel has been upholding public safety for all at the city building. It would be shameful for the City to abandon these people now.

“I work in the same department as these workers, and the Real Estate Division has buildings all over San Francisco that we clean. Fighting against the outsourcing of these jobs is important because we need to push back against our jobs becoming temporary or contracted out. Subcontracting or using temporary workers is a trend that could always impact us down the line, even if it doesn’t affect us directly right now,” said Kenneth Li, a Custodial Supervisor. “We also have to protect the cleaning standards that everyone working in these building enjoys. City workers are required to adhere to higher standards around things like using green cleaning chemicals compared to subcontractors.”

Our union is demanding that the City and GSA protect our health and safety, and cease contracting out our work immediately. They should instead hire our dedicated custodial and security workers at 49 S. Van Ness as permanent civil service workers.

Sign our petition to support these members at www.seiu1021.org/protectjobs.