California College of the Arts Staff and Faculty Continue to Fight for a Fair Contract, as the National Labor Relations Board Issues an Unfair Labor Practice Complaint 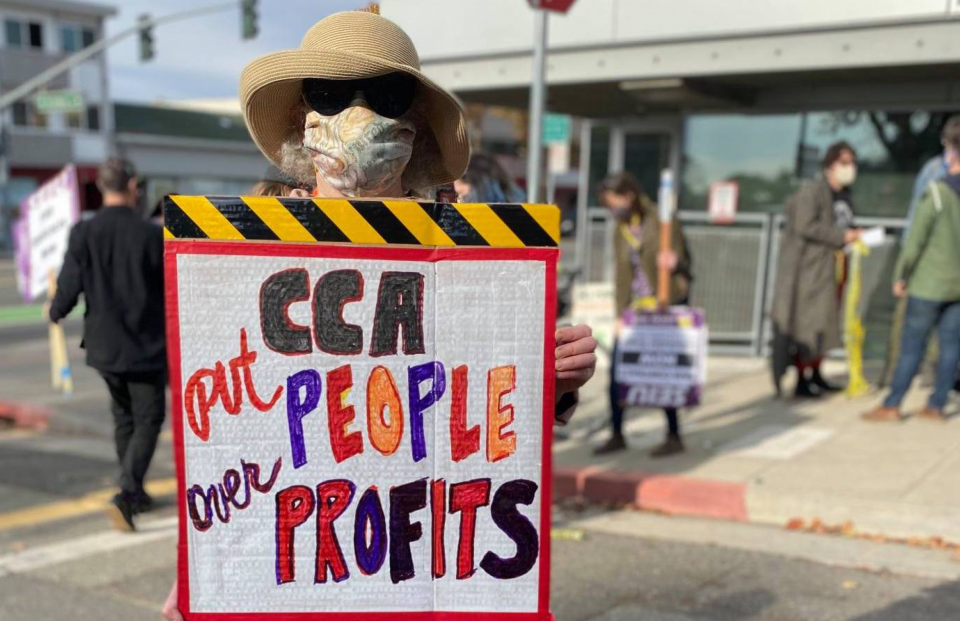 Since California College of the Art (CCA) staff formed their union with SEIU Local 1021 two years ago, they have been working hard to secure a fair contract with a living wage and job security. CCA non-tenured faculty have also been at the bargaining table for over a year since their first contract expired. Despite the fact that CCA relies on 1021 members—adjuncts teach 75 percent of CCA’s courses, and the studios and facilities could not run without their staff—the administration continues to treat them as disposable, making unilateral changes to working conditions while stonewalling at the bargaining table.

CCA Chapter President Matt Kennedy is just one 1021 member whose treatment by CCA’s administration is the subject of an unfair labor practice (ULP) complaint issued by the National Labor Relations Board (NLRB) last week. Matt, who has worked at CCA for nearly a decade, was furloughed at the end of the spring 2020 semester, along with many other staff. He was not recalled until June of this year—though he was told his old position no longer existed, and that if he wanted to come back, he would have to accept a lower-paid position. When he returned in July, he found that much of the work he had been doing before—and could have been doing at least part-time during the pandemic—was now being done by others.

“Throughout the furlough, no one at CCA—not my supervisor, no one in management or the administration–ever reached out to me about when I might come back to work. No one reached out to ask if I had any interest in coming back even part-time or if I’d be willing to do anything remotely in the meantime,” Matt said.

“I’ve never had anything short of a stellar performance review since I’ve been there,” he continued. “I’ve worked on projects involving creating vendor relationships for purchasing equipment; one project was going to save the college over $50,000 over the next four to five years–a little more than what it would have cost for them to just give me my salary.”

With a new baby at home and only a year away from eligibility for student loan forgiveness, Matt didn’t see too many options other than accepting the lower-paid position. Unfortunately, this is far too often the case for staff and faculty at CCA—and the administration knows it. Often hiring new CCA graduates, they tell them that it’s just a place to get started—presumably as an excuse for shortchanging them on pay and benefits, in the fast-food model. With hefty student loans and few employment options in their field, many don’t feel like they can say no and don’t have the leverage to negotiate better pay or benefits for themselves.

And even after proving themselves for years, they don’t seem to gain much leverage. This is exactly why they have joined SEIU Local 1021.

CCA’s website talks about its “Decolonial School” cohort and has a whole section of its website dedicated to “diversity, equity, inclusion, and belonging”—yet it has rejected multiple union proposals to support students, faculty, and staff of color. Faculty and staff of color have complained of being paid less and passed over for positions they were qualified for or even already doing. While many staff and faculty can barely pay their bills and have no benefits, CCA’s president Stephen Beal is paying himself over $580,000 a year, and CCA’s provost, Tammy Rae Carland, is taking home over $280,000. Yet Carland refuses to come to the bargaining table, instead sending their attorney, Mike Vartain, to do CCA’s dirty work of union-busting.

1021 members at CCA are turning up the heat, organizing and mobilizing to force CCA to recognize them and settle a fair contract. And they still have the ULP to respond to.

For Matt, the fight is not over. “I feel like what happened to me was definitely retaliation for my union work at the bargaining table and organizing my colleagues.”

That kind of union-busting has no place in the Bay Area. Fortunately, Matt and his colleagues at CCA have the full backing of SEIU 1021 and our 60,000 members across Northern California—which means the fight won’t be over until they have the contract they need and deserve. 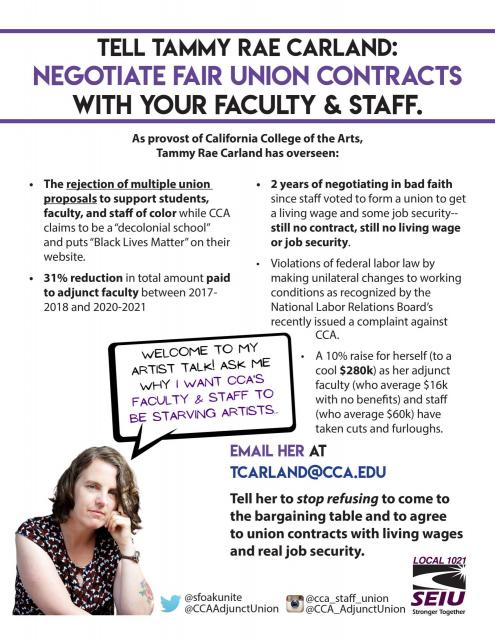