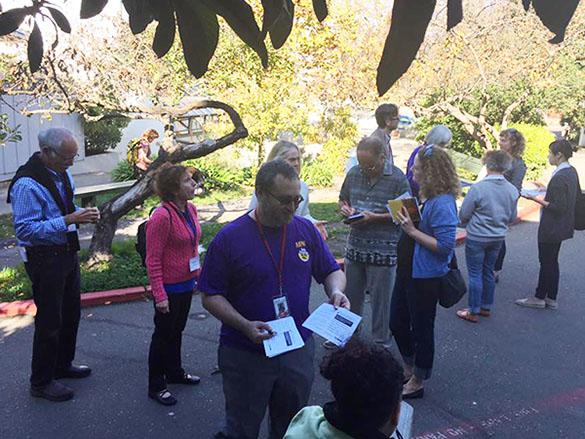 At the California College of Arts Alumni Weekend Saturday and Sunday Nov. 12 and 13, adjunct faculty and their student supporters took the extreme step of asking alumni to withhold giving donations to the college until a fair contract is reached.

The adjuncts, who comprise the vast majority of faculty at the college, voted two years ago to unionize with SEIU 1021, but because of CCA administration unwillingness to address compensation, they still have no contract. So adjuncts and students set up in front of the art exhibits on display and handed out cards asking alumni to pledge withholding donations of money and volunteerism until the administration settles with them. They also handed out an open letter signed by MacArthur Fellows, internationally acclaimed artists and writers, full professors and professors emerti in support of the adjuncts, and declaring that the “corporatization” of CCA is holding adjuncts hostage and threatening the school’s mission to be a creative and diverse home for arts education in the Bay Area.

The letter points out that CCA president Stephen Beal enjoys a $628,077 compensation package while tuition has soared to over $45,000, yet the majority of CCA’s faculty earn less than $30,000 a year – without benefits.

“We represent 78 percent of the faculty at CCA, yet we have no guaranteed job security from semester to semester,” said Luz Marina Ruiz, who is in her third year teaching First Year Program 2D and Printmaking at CCA. “Our incomes do not match the current Bay Area rental rates. Forced out of the Oakland rental market, some of us have longer commutes and are resorting to living with friends to hold us over.”

While teaching artists are being displaced from the Bay Area, CCA is moving ahead with an ambitious building plan to consolidate the school into one campus on the high-dollar real estate of San Francisco.

“There are these big sweeping changes being made to the school we love, but the reason we love it – the teachers – are getting no support,” said Lukaza Branfman-Verissimo, a 2015 CCA graduate who has been active in holding the school accountable to its stated commitment to social, cultural, environmental, and economic justice.

“President Beal needs to listen to the community and take care of the people, not just the buildings, that make CCA a special place,” Branfman-Verissimo said.