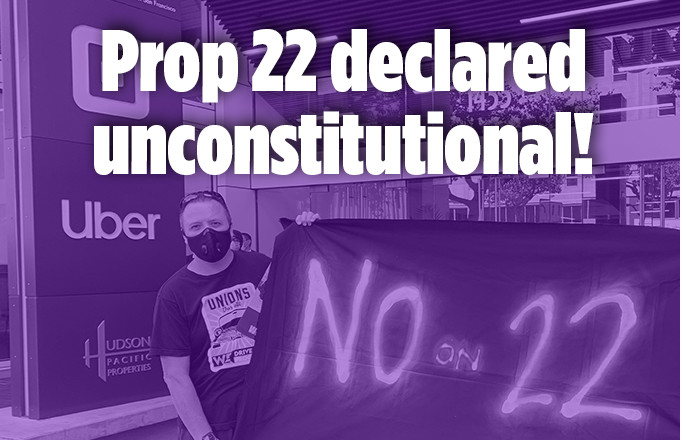 Click here to stand with gig workers by signing their petition.

In a huge victory on Friday, Judge Roesch of the Alameda Superior Court ruled that Proposition  22 violates the Constitution of the State of California, meaning the gig industry-funded ballot initiative is unconstitutional and is therefore unenforceable.

“The court ruling isn’t just about us drivers or Uber or Lyft. To me it also means that corporations can’t spend their way out of following the law. The gig companies spent a lot of money to try to take away our rights, and thankfully the court saw right through what the companies were trying to do. There’s a lot to celebrate, and now I feel like I can breathe a little easier,” said Hector Castellanos, a leader with We Drive Progress and a driver for Uber and Lyft.

In 2020, the gig industry spent more than $200 million to pass Prop 22. The law set a dangerous precedent by allowing billion-dollar app companies to purchase legislation denying their workers their rights while stripping lawmakers of the ability to protect these workers.

“Corporations like Uber, Lyft, and DoorDash bankrolled the most expensive ballot measure in the history of our state to strip workers of their rights. Prop 22 attempted to sidestep California’s Constitution to boost the profits of these Silicon Valley corporations by undermining our democracy and our state constitution. Gig workers have been organizing since long before Prop 22, and didn’t give up even as their employers spent over $220 million to undermine their rights—and our union stood with them every step of the way. We will continue to follow drivers’ lead and support them in their fight to hold the gig giants accountable,” said Joseph Bryant, SEIU 1021 President.

The gig corporations have made it clear they plan to appeal Judge Roesch’s decision, throwing even more money at taking away the rights of workers. Judge Roesch, however, was unequivocal in his ruling that Prop 22 violates the state Constitution.

Drivers will continue to lead the way in this fight, just like they have for more than two years. We must continue to support them and make it clear that democracy cannot be bought, no matter how much Uber and Lyft are willing to spend.