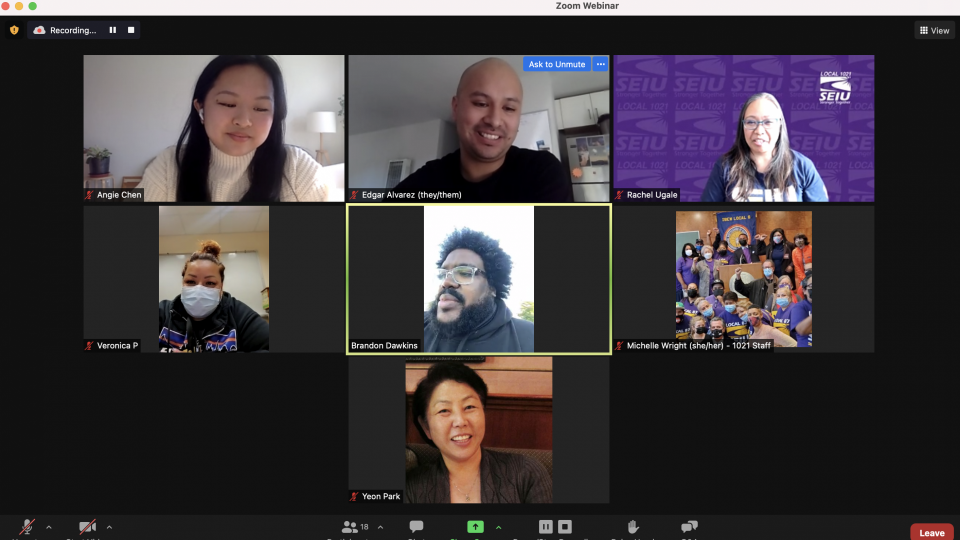 October 12, 2021: Strong contracts are not just won at the bargaining table: They take energized and active members across the workplace, and they can also require a political approach and getting the public on our side. On Sunday, October 10, a group of Alameda County Committee on Political Education (COPE) members held a panel discussion on how to use public outreach and political pressure to win big at the bargaining table.

Rachel Ugale, Alameda County COPE secretary and a member leader from the Chabot/Las Positas Community College District, said the panel was here to “share their experiences and what it took beyond sitting at the bargaining table to get those victories for their chapters, their members, and their communities. It’s all about making sure we’re all working together to create that political power, to hold our elected officials accountable, to influence legislation that improves the lives of working people and also benefits our communities.”

The panel included members with bargaining team experience, and was moderated by Brandon Dawkins.

Veronica Palacios of Alameda Health System said, “We started bargaining three months prior to [the expiration dates] our contracts ,and it was not going well. Our contracts were actually torn up right in front of us and [we] were told these were non-existent. Three thousand members strong negotiated for another nine months and ended up striking. Long story short: we won everything we needed. No takeaways and three great contracts. Our next fight is with county governance, so we are still fighting; but we won one of the biggest battles, which was uniting our membership, striking, and winning.”

Edgar Alvarez, a mental health resource specialist with La Clinica de la Raza, said, “Our fight is still going on,” and noted that one tactic they have used is to go to their bosses’ bosses: Instead of fighting with the chief executive officer (CEO) and chief financial officer (CFO), their members have been going to the board of trustees that oversees the entire operation. They have been questioning the numbers they are being provided and pushing for investments in services and personnel instead of lower-priority information technology projects. They said, “The workers are the community! All of us in the Fruitvale district went to La Clinica and started working there because we believe in working in the community; but the CEO doesn’t reflect that.” That’s is why it’s so important to escalate beyond the CEO to the board of trustees.

Angie Chen followed up by stressing the importance of elected officials hearing directly from workers to understand how working conditions are affecting them. This kind of political activity, starting with going directly to elected officials, is just the foundation, however, as Veronica Palacios explained. At Alameda Health System, her chapter worked to convince the board of trustees: “We tried the friendly approach with the County Board of Supervisors. We would have meetings and go to general comment to tell them there were problems. We were short-staffed; we didn’t have proper equipment. We didn’t have the proper tools we needed to treat the community for public health. The board of trustees weren’t listening. We used everything: news reporters, the media, the publicity COVID was getting, because we didn’t have personal protective equipment; everything we could use was a stepping stone for us. Finally, we used the unfriendly approach: We went on strike, and we won. The Alameda County Board of Supervisors had no choice and they fired the entire board of trustees, the CEO, and the whole management structure. A year later, we’re still seeing changes!”

Moderator Brandon Dawkins hit the nail on the head: “You got the entire Board removed! If that isn’t power, I don’t know what is.”

To learn more about building and using that kind of power, join your local COPE Committee today! As Rachel Ugale said, “If you’re not already part of a COPE committee to consider sitting in on some meetings and learn about what you can bring back to your chapter and your community.”