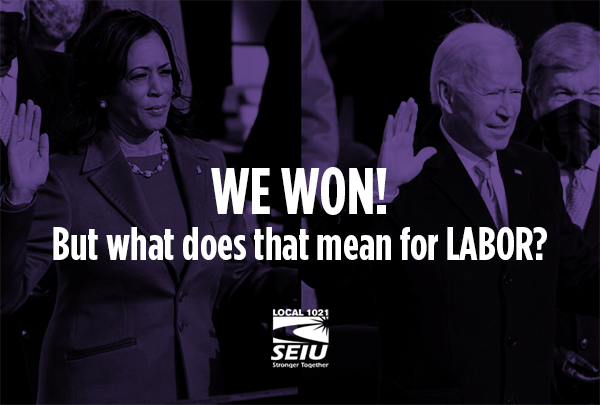 “Last week’s inauguration felt like taking a deep, cleansing breath of fresh air. Gender and racial barriers were broken, young people, Black and brown people, queer people, immigrants, people with disabilities were on the dais, more closely representing our United States than any White House stage in the past 4 years. With double Senate wins in Georgia, Democrats now hold both houses and the White House and as a worker I feel a measure of relief knowing that the onslaught of attacks we have faced over these past 4 years by the prior administration have ended.

But the end of that administration doesn’t mean that workers or communities will automatically be handed justice or respect. Ousting a racist from the White House doesn’t mean we’ve ended racism. Voting out a science-denier does not mean that workers automatically get the protections deemed necessary by scientists. If anything, what it means is that the ground we have been standing on as advocates, activists, and organizers is once again stable enough to get our footing and redouble our fight.

Because what these wins have shown more than anything is that organizing works. It’s something we have known in the labor movement for a long time. But now there is a whole new generation of people in very large numbers who also have the experience of a big organizing win. We as a nation can believe in ourselves and our collective power to make change.

And so, inauguration day was not the end of a road to power, but an important signpost along the way to winning for workers and the working class. If anybody understands that it’s Alexandria Ocasio-Cortez who didn’t even attend the inauguration but instead was on the strike line with Teamsters at Hunts Point Produce Market in her home district in the Bronx.

To outsiders it may have seemed like an odd choice not to celebrate this transition of power in Washington DC, but for us as workers we know there’s no better way to celebrate than standing in solidarity with your labor siblings and continuing the fight for justice!”