3,000 workers at Alameda Health System Bargain for 14 Months, Strike for 5 Days, and Finally WIN a Tentative Agreement for a Four-Year Contract with a New CEO, New Trustees, and Many New Members "The power we have is the power to stick together to fight for common goals." 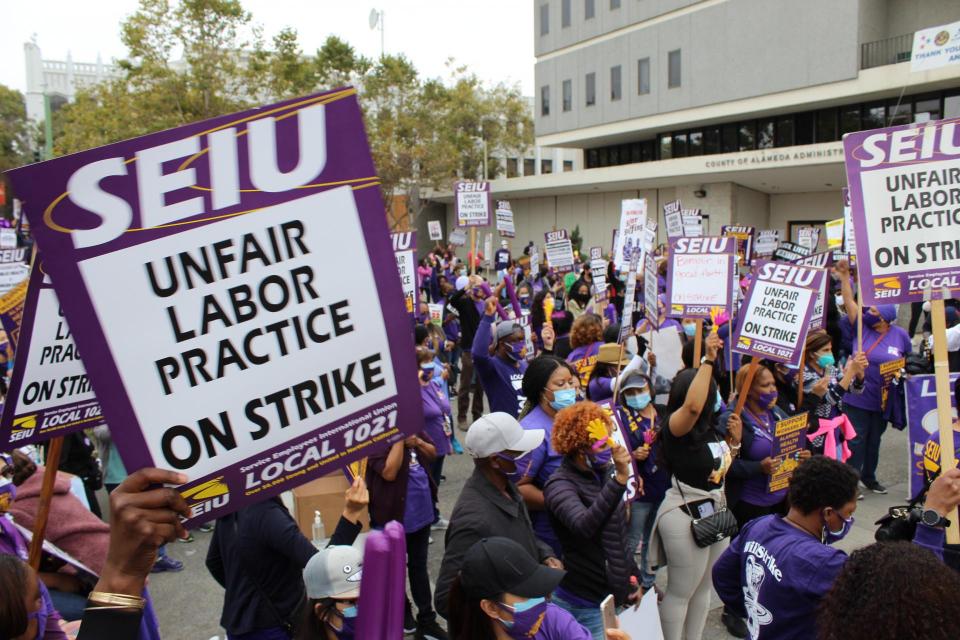 An “…incredibly momentous settlement within truly unexpected conditions,” is how Alameda Health System (AHS) Chapter President John Pearson described the tentative agreement reached between SEIU 1021 members and AHS management last week. John, an Emergency Room nurse at Oakland’s Highland Hospital, summed up the long, hard contract campaign by saying, “We can win when we make a plan together and when we struggle together.”

Since February of 2020, AHS members have been at the table with management, facing down proposals to start rewriting their contracts from scratch, with massive cuts to benefits, eliminated job security, and many takeaways. The scorched-earth approach from management made the situation for all of AHS’ workers very clear: stick together and fight for big changes at AHS or watch the system continue to fail to meet the needs of workers and patients alike.

John Pearson described his years of experience working at AHS as, “…years of trying to figure out how to hold things together for our patients with chewing gum and zip ties.”

From the beginning, members vowed to use their solidarity to force Alameda County’s Board of Supervisors to take control over AHS so that county’s public health system would be overseen by elected officials who can be held accountable at the ballot box. After months of bargaining and continued intransigence from AHS management, the chapter voted 98% YES to authorize a strike, and in October of 2020, the workers followed through with a five-day unfair labor practice strike.

This bold action had immediate results, with the Supervisors calling on the hospital system’s Board of Trustees to resign. The CEO and Director of Labor Relations soon followed, meaning that the workers had gone on strike and gotten their bosses fired.

Though they were bargaining three contracts, they demanded—and got—a single bargaining table so they could make sure every member was represented. As management brought new negotiators to the table and promised to build trust with AHS workers, the workers maintained their solid stance and never stopped advocating for a better, fairer system where workers and patients would come first. Even after the strike, they rallied at clinics in February and kept the pressure on by wearing their purple to work every Wednesday.

Last Wednesday, their efforts paid off as members reached a Tentative Agreement with management. The four-year deal includes 3% cost of living adjustments per year (12% in total), retroactively effective to the start of the fiscal year in 2020, no takeaways from previous contracts, no increased healthcare costs, and many other big wins for members.

“Working together at a common table, with all three groups together, got us great results. We were all working toward the same things. We were able to bring San Leandro Hospital in, which builds our strength and power, and our incredibly successful strike showed just how much power we have,” said Sheleka Carter, Bargaining Team member and Community Health Outreach worker at Highland.

“We made history with a five-day strike in the middle of a pandemic. Power went back to the members. We’re going to embrace that power and make sure things are better across AHS for our members and our patients,” said Patty Yanez-Medrano, a Bargaining Team member and Patient Service Representative at Eastmont Wellness Center.

John Pearson said, “Alameda County had been failing to fund and govern its own system. On behalf of our patients and our members, we put a stop to it. This is a historic contract.”

The members at AHS will now vote on whether or not to accept this Tentative Agreement, but they won’t stop working together to make AHS a place where the working class and poor people of Alameda County can get the first-class healthcare they deserve.