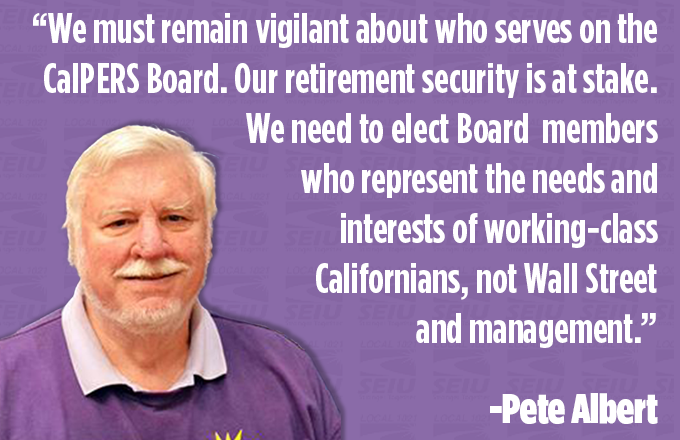 Managing pension and health benefits for more than 1.6 million California public employees, retirees, and their families, the California Public Employees’ Retirement System (CalPERS) is the largest public pension fund in the United States. At the top of the CalPERS executive branch agency is the Board of Administration.

The thirteen-member statewide governing Board is elected, appointed, or holds office ex officio for four-year terms. This year, eligible active and retired CalPERS members have an opportunity to elect two representatives for the CalPERS Board of Administration. The terms of incumbents David Miller and Margaret Brown expires on January 15, 2022. The new terms of office begin January 16, 2022, and runs through January 15, 2026.

Although there are many active and retired CalPERS members who are eligible to vote for the Board members, actual voting numbers have been historically very low. An effort by SEIU Local 1021 to increase voter turnout can have an impact. As in other elections, every vote counts.

It’s vital to elect fellow working-class union members to the CalPERS Board of Administration to ensure the agency hears our voice, represents our interests, and we have a seat at the table. We need pro-employee and pro-retiree board members committed to defending hard-earned pension plans against right-wing ideological attacks. We must remain vigilant about who serves on the CalPERS Board. Our retirement security is at stake. We need CalPERS Board members protecting union interests and reflecting our values. We need to elect Board members who represent the needs and interests of working-class Californians, not Wall Street and management.”