Today: Students to Speak Out About California College of the Arts Administration’s Exploitation as CCA Workers Move into Day 3 of Their 4-Day Unfair Labor Practice Strike High turnout, energy, positive media attention, and public support from students, faculty, and community from the first 2 days of the strike have CCA staff more determined than ever to keep pushing for a fair contract. 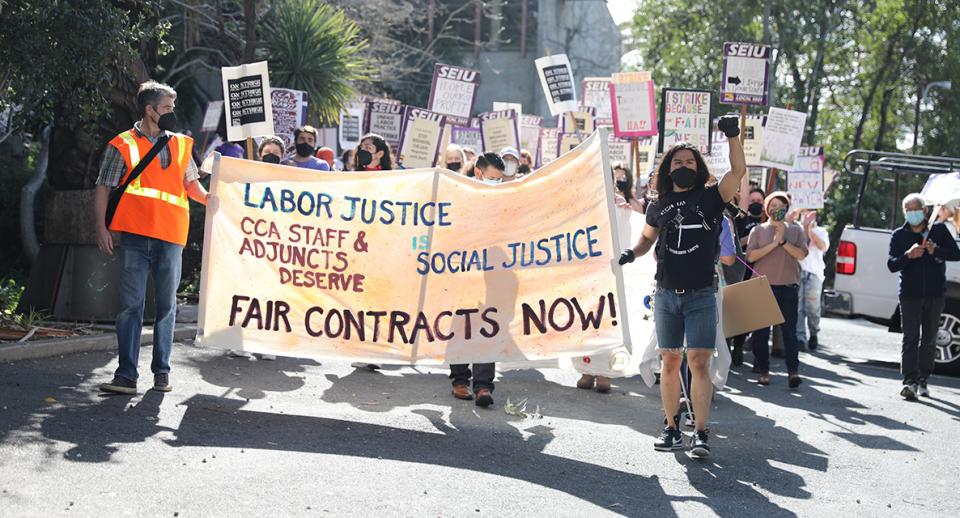 After two full nine-hour days on the picket lines, California College of the Arts (CCA) staff head into the third day of their four-day unfair labor practice strike energized and motivated by the outpouring of support from students, faculty, and the community, manifested in over $19,000 in donations to the strike fund they set up a week ago, numerous well-received news stories, appearances at rallies on the strike lines from elected officials, and strong participation from students, including the CCA Student Union. Students will be speaking out about their own experiences at the college and why they support CCA staff and adjunct faculty’s fight for a fair contract during rallies on the picket line—contrary to administration’s claims that the strike is harmful to them.

“I’ve seen a lot of my peers out here, and I’m very proud of that. I think the general consensus is that we’re all fed up and think that everyone deserves more than they’re getting from CCA,” Zoë Segura, a junior sculpture major at CCA, told KQED.

The strike could have been avoided, had CCA administration decided to get serious about reaching agreements on their employees’ key priorities after they voted by 97% to authorize a strike in December. Instead, classes have been cancelled, studios and facilities shuttered, services interrupted, and their staff, faculty, and students are speaking out to news media and on social media.

CCA staff will continue to hold the picket lines from 8am to 5pm outside the San Francisco campus today. They will hold a community speak-out at noon today, hearing from students, staff, faculty, and alumni, as well as artistic activities related to the strike at various times throughout the week. Adjunct faculty are participating in a sympathy strike, cancelling classes and joining the picket lines. Monday, an overwhelming majority of ranked faculty members signed a letter to CCA administration urging them to settle a fair contract with staff and adjuncts and pledging not to cross the picket line, instead participating in strike-related teach-ins and pedagogical activities.

Key priorities that administration has not adequately addressed in contract negotiations include livable wages—though CCA President Stephen Beal is paid more than any other administrator of a private Bay Area college, behind only the president of Stanford, roughly 2/3 of full-time staff are considered low-income by Bay Area cost of living measures—and job security, as well as input into decision-making. CCA’s economic proposal keeps many workers living paycheck to paycheck and is far below the rate of inflation. Salaries for the entire unionized workforce is less than 10% CCA’s $108 million budget, and the raises proposed would cost less than 1% of CCA’s budget.

Students and alumni have sent hundreds of emails to administration urging them to settle a fair contract immediately. At least 15 local elected leaders, including nine of the eleven members of the San Francisco Board of Supervisors and Assemblymember Mia Bonta, have publicly urged CCA’s administration to settle a fair contract with staff and adjunct faculty. SF District 6 Supervisor Matt Haney spoke at Monday’s rally. “We are 100% united behind you. The fact that folks have been negotiating for two years in good faith and have yet to be offered a fair contract—shame on you, CCA. Shame on you. When we have people in our city educating our young people and you are paying them poverty wages, that affects all of us. That is unacceptable,” said Haney to cheers from the strikers.

Instead of investing in its own workforce, CCA has decided to tie up its money in a “campus unification plan” — a real estate venture similar to those that recently bankrupted and nearly shut down San Francisco Art Institute and Notre Dame de Namur University in Belmont– underscoring the need for involvement in institutional decision-making. CCA’s Potrero Hill campus, has already been mortgaged as collateral for $30 million in debt the tuition-dependent college has no realistic way to repay, given their actual fundraising record. They also entered into an ethically questionable deal with a Texas real estate developer whereby CCA financed the construction of dorms by requiring students to live in them at rapidly increasing rent as a condition of enrollment—except when they are kicked out with no recourse.

“I got here on a full ride from a community college. I’ve lived on the streets since I was 13 years old,” said student Benjamin Chun at Wednesday’s rally at the Oakland campus. “This school promised me glory and riches. Then a year after I got here, at the beginning of covid, they said get out of the dorms, and they cut my housing. When I tried complaining about it, they threatened me with expulsion. I’m the evidence of the financial mishandling of this school. For the first year [after] I was kicked out, I was living on the street.”