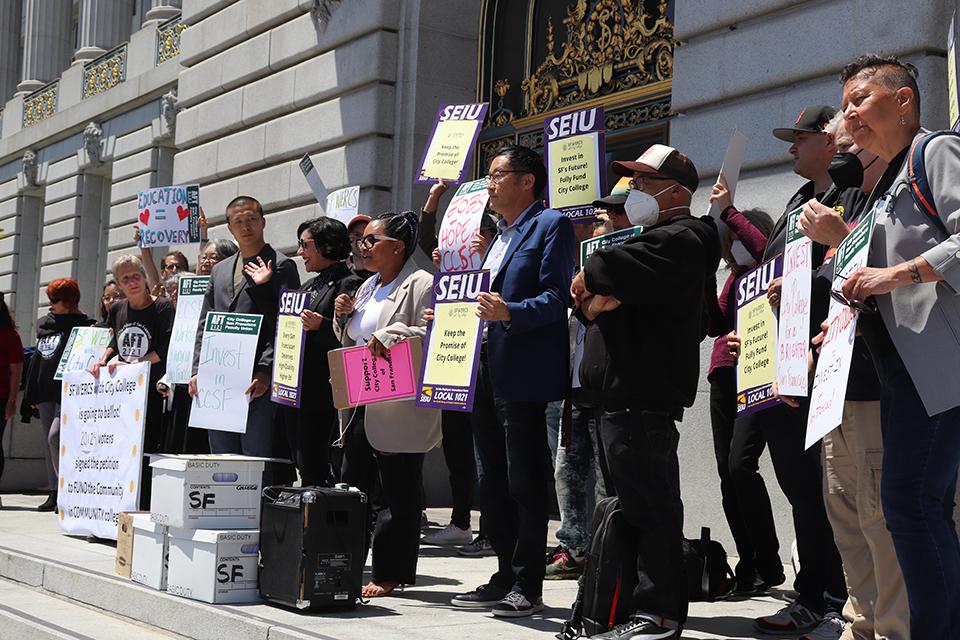 After qualifying for the November 8 ballot with over 20,000 signatures – well over twice the requirement – San Francisco City College students, faculty, staff, and other supporters from the community and from a historic labor coalition will kick off the “Yes on O” voter education and mobilization campaign this Sunday.

Advocates will gather at 11am at Rossi Playground for a brief program before heading out into the community. They will knock on doors to speak with San Francisco residents about the importance of City College as a uniquely democratic SF institution that provides a free pathway to upward socioeconomic mobility to San Franciscans of all ages, backgrounds, and income levels – especially English language learners, formerly incarcerated adults, low-income students of color, and other underserved demographics – and about why Prop O is crucial to both ensuring and expanding on that role after decades of cuts. Prop O will pass with a simple majority of 50% + 1 votes in the November 8 general election.

Members of the City College Revenue Unity Coalition – a historic collaboration of faculty and staff represented by SEIU 1021, AFT 2121, the SF Building Trades, and Stationary Engineers – worked hard for many months to craft the ballot measure and rally support for it. Endorsers include SF Supervisors Gordon Mar, Myrna Melgar, Dean Preston, and Shamann Walton; the entire City College Board of Trustees; organizations including SF Rising, Jobs with Justice, Housing Rights Committee, Chinese for Affirmative Action, SF Young Democrats; and many others.

“We are thrilled at the level of community support for this initiative so far,” said City College Classified Senate President and SEIU 1021 Education Industry Chair Maria Salazar-Colón. “Many of the students we serve at City College need support to continue their education – things like childcare, English as a second language classes, tutoring services, even help meeting basic needs like housing and food. We serve students who don’t have a lot of options for higher education and workforce training. These are folks being pushed to the margins and pushed out of the city. The funding provided by this ballot measure will help us get these students the support, resources, and programs they need to get good jobs and stay in San Francisco.”

AFT 2121 President Mary Bravewoman said, “This measure represents a much-needed investment in higher education and workforce training for the people of San Francisco. The revenue raised will allow City College to build back the programs and services that are most needed in our communities, especially as the most vulnerable San Franciscans work to recover from the pandemic and prepare for a recession.”

Revenue Unity Coalition of City College is a coalition of stakeholders including SEIU 1021, AFT 2121, the Building Trades, Stationary Engineers and District Administration all working to develop strategies to fund the vital services that City College provides to the City of San Francisco. We believe that labor working together with college and city leaders can and will fund San Francisco’s future.