Strike Update: SEIU 1021 Bargaining Team Offers District Complete Package of Proposals to Move Negotiations Forward in Hopes of Reaching Settlement Tonight As thousands marched in the streets, members of the classified staff bargaining team shared powerful stories with the District’s team about how the staffing crisis and low wages causing it are personally impacting them, their coworkers, and students 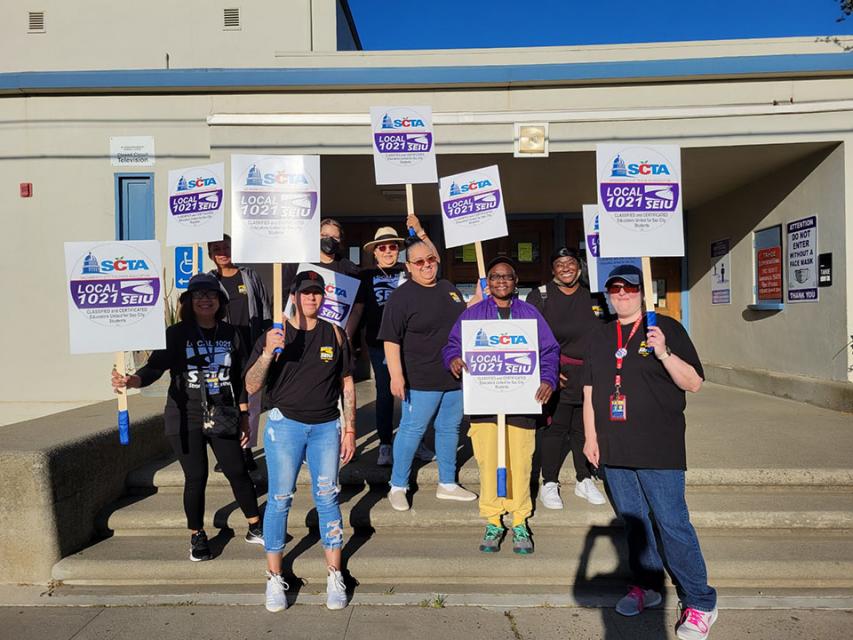 While thousands of teachers, staff, students, and community members were rallying for fully-staffed schools at Hiram W. Johnson High School this morning and marching through the neighborhood in a sea of red and purple, the SEIU 1021 bargaining team, representing Sac City Unified Schools classified staff such as instructional aides, nutrition service workers, school bus drivers, clerical staff, custodians, and maintenance workers, was at the negotiating table this morning. District management showed up, but did not have new counterproposals. The SEIU 1021 bargaining team offered a comprehensive package of proposals in an effort to move the process forward as quickly as possible.

They also shared very personal stories with District management about how the staffing crisis plays out every day at the schools where they work–and how low wages are impacting them and their coworkers. For example, very few instructional aides ever make more than just over $15 an hour, even after decades of service and despite bearing huge responsibility working with the District’s most vulnerable children. Being on strike is a huge sacrifice for these workers who have little to no savings; a friend has created a GoFundMe strike fund to help them get through the strike, but every day the strike goes on is another day without pay for committed District employees who give their hearts and souls every day to Sac City kids.

Tishanna Traylor is an instructional aide who works with special education students at Luther Burbank High School. “I really enjoy what I do. I enjoy watching the kids glow when they understand the assignments or get an A on that test. When they’re motivated to complete an assignment or even just begin an assignment. I enjoy being a part of that experience with them. I tell my students I believe in them. Some of them don’t hear that at home. Their jaw drops. It’s my job to make them believe in themselves. I do believe in them, and I believe in education.”

It’s no wonder so many instructional aides like Traylor are leaving the District in droves. Low wages keep Traylor and instructional aides like her, who earn between $15-20 an hour, living paycheck to paycheck, with little to no savings. Even the District acknowledged over the weekend in negotiations that their classified staff are severely underpaid. Fast-food restaurants hire workers starting at $16 an hour, without the huge responsibilities of working with vulnerable students. And prospects for advancement are slim. “I’m in college myself,” said Traylor. “I want to stay with the District, but I can’t stay with this District if there are no opportunities for me to earn a real living. It’s like they don’t want to see you do better.”

“All we are asking for is the same cost-of-living increase the school board just gave Aguilar in December,” said SEIU 1021 Chapter President Karla Faucett. “He makes over $400,000 a year and has two 401K plans to which the District is contributing over $20,000 a year. And they tell the instructional aides who have given decades of their lives to taking care of vulnerable kids that they can’t afford to pay them a dignified wage? Sacramento parents need to know what kind of disrespect they are showing to those of us they entrust their kids to for eight hours a day.

“We want to get this done,” added Facuett. “Our members can’t afford to strike, but we also can’t afford not to. This may be a game to the District, but it’s not to us. We are ready to get our schools back up and running as soon as they show us it’s really what they want as well.”