Strike Day 7: On César Chávez Day, SCUSD Classified Staff Implore Sup. Aguilar, Son of Farmworkers, to Stop Union-Busting and Reach an Agreement to Remedy the Staffing Crisis Despite using his farmworker parents as part of his story, Aguilar has continuously disrespected his lowest-paid employees and currently seems to hope they will get desperate enough to give up the fight for dignified wages–even though it would cost the Di 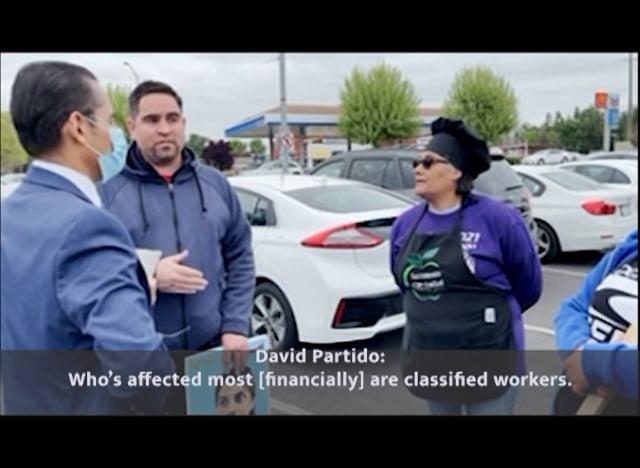 Classified staff, educators, parents, and community members will rally once again at Serna Center at 11am as kids remain out of class a seventh day.

Every year, Sacramento City Unified School District saves $5.5 million by having 400 vacant classified positions. But those huge cost savings, which have been poured into the District’s record $123 million unrestricted reserves–8.5 times higher than the required minimum–come at a huge cost to the people, mostly women and people of color, who pick up students in the morning, feed them hot meals, clean the classrooms and maintain the facilities, and provide individualized attention to students with disabilities and special needs.

“We are highly skilled professionals, many of us with decades of experience, and we’re doing the work of two or three people simply because we don’t have enough staff,” said Debra Durazo, an SEIU 1021 bargaining team member who is the controller at West Campus High School. “Instead of paying enough to retain and recruit enough staff to do the work, they are just making all of us do extra work to the point where it’s completely unsustainable, and then they’re socking that money away and pretending they can’t touch it. It’s simply immoral.”

SEIU 1021 members at SCUSD include school bus drivers, custodians, instructional aides, campus monitors, nutrition service workers, and maintenance workers. They are the lowest-paid group of employees at the District. Many earn minimum wage or just barely above. In nutrition services, the District has been laying off full-time employees while hiring part-timers for three hours a day–too little to earn a living and, importantly, too little to be eligible for benefits like health insurance.

Just yesterday morning, three striking nutrition services workers approached Superintendent Aguilar in the parking lot of a Denny’s where he was having breakfast, and shared their concerns with him. “Many of us have two jobs in order to survive, and many of us are only allowed to work for three hours a day,” said Maria Santamaria, a nutrition services worker. “The three hours we work will only pay $300 to $600 a month to provide for our family. And we can’t take another job because we have to take care of our children. Why didn’t you make it to negotiations today?  What’s missing? How can you help? And in turn, can we help?”

While some progress has been made at the bargaining table, and despite acknowledging over the weekend that classified staff are severely underpaid, the District continues to show disrespect to its lowest-paid employees by refusing to negotiate a livable wage. After six years with no cost-of-living adjustment, and seeing the superintendent receive lavish raises and bonuses on top of a salary already 50% higher than the governor’s, classified staff are fed up and insulted by the District’s offers.

“They want to offer a signing bonus to workers who bring in new hires–but that proposal would actually cost them nothing, because none of us could in good conscience encourage a friend or family member to come work for an employer who treats us with such disregard and disrespect,” said SEIU 1021 SCUSD Chapter President Karla Faucett. “Our working conditions are an embarrassment. And when they treat us like that, they’re actually treating their students the same way, because our working conditions are students’ learning conditions. That’s why the community is standing behind us. They’ve seen how the staffing crisis is affecting their kids every single day.”

Classified staff, educators, and community members will rally once again at Serna Center at 11am today, hoping that on Cesar Chavez Day, the superintendent and school board will finally stop trying to break employees who were struggling to get by even before losing a week’s pay to a strike.

You can support striking SEIU 1021 members by making a donation to their GoFundMe here.