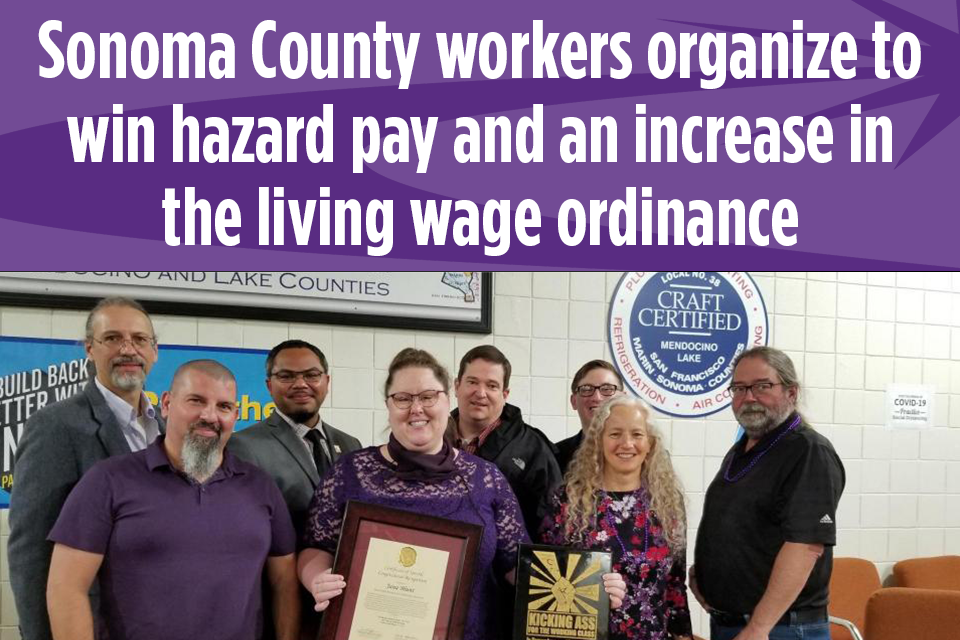 December was an exciting month for Sonoma County workers, who scored two big wins from the Board of Supervisors. Thanks to stellar organizing led by chapter president Jana Blunt, members won hazard pay for the more than 4,000 County workers (with the exception of elected officials) in recognition of their dedicated service and sacrifice during the COVID-19 pandemic. Members also secured an increase in the county’s living wage ordinance to $16.75 an hour that will boost the take-home pay of the lowest-paid County employees.

After organizing union members to vote in an online survey to award hazard pay to County employees, still more organizing, mobilizing, and negotiating with the Sonoma County Board of Supervisors was needed to achieve the final outcome. The County Administrative Office (CAO) recommended $1000 per permanent employee, to be prorated for extra-help employees based on number of hours worked. Union members were able to get the Board of Supervisors in real time at the meeting to adjust the amount to $1500 per employee–and later to secure the same for extra-help employees as well.

“Everyone has a different personal opinion of who is and isn’t ‘frontline,’” said Jana. “There is no magical amount of hours worked that should qualify a person for hazard pay. This is not a ‘gift of public funds;’ it’s hard-earned federal compensation specifically carved out for frontline workers.”

The Board also voted to increase the county living wage ordinance to $16.75 an hour for all county government employees and workers for private companies and nonprofit organizations that contract with the County. It’s the first time the living wage has been raised since it was established, at $15 an hour, in 2016, and went into effect for new contracts January 1; it will be phased in by April 1 for existing contracts.