Sonoma County Workers Rally at Board of Supervisors to Demand Action to Address Severe Staffing Crisis Short staffing is jeopardizing critical public services and endangering residents – and frustrated county workers are speaking up. 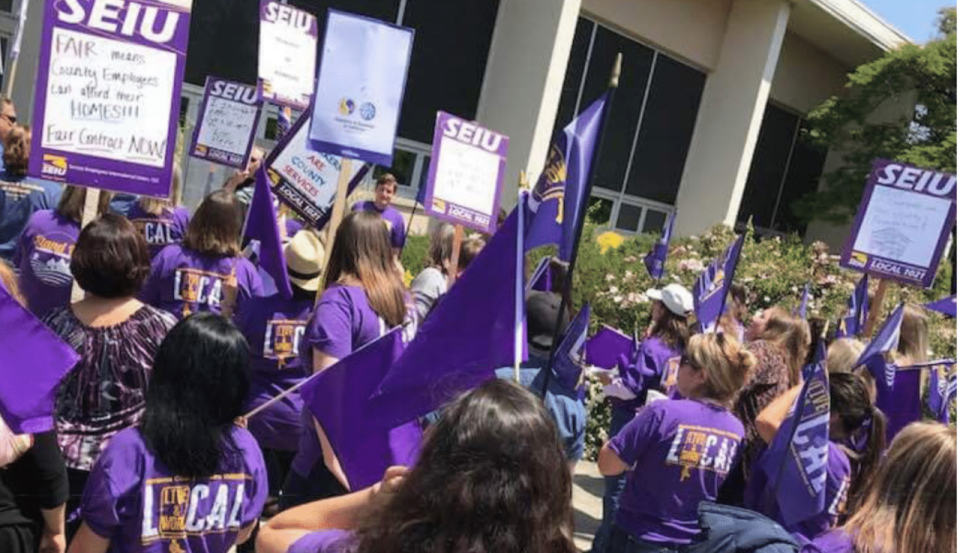 Sonoma County is experiencing an unprecedented staffing crisis that is leaving residents in a lurch, particularly the county’s most vulnerable. After the strain of multiple fires, floods, and the pandemic, on top of pay that has not kept pace with inflation, employees are leaving the County at alarming rates to find more sustainable employment elsewhere. Those who remain are struggling under an ever-increasing workload – and county residents are paying the price.

Tuesday, January 24, county workers will show up en masse to urge the Sonoma County Board of Supervisors to take fast action to staunch the bleeding.

“As the urgent needs of the county have multiplied, more and more staff have left, unable or unwilling to take on such huge amounts of highly stressful, even dangerous work for pay that simply is not competitive with nearby counties and the private sector,” said SEIU 1021 Sonoma County Chapter President Jana Blunt, who has been a Senior Clerk-Recorder-Assessor Specialist for the county for nine years.

“Child Protective Services, Medi-Cal, Veterans’ Services, Crisis Stabilization Unit (CSU) all short-staffed. Social workers are unable to take sick or vacation time for fear of mortal danger to children, the disabled, and the most vulnerable. So they work when they’re sick, physically and mentally, putting themselves, their coworkers, and their clients in danger–at the very least, diminishing the quality of service we should be providing. And our CSU has experienced overnight closures due to a lack of nurses who are willing to work for such low wages. Their patients, experiencing mental breakdowns, are then farmed out to local emergency rooms which are naturally unequipped to provide necessary care.

“Besides that, staffing shortages in the assessor’s and tax collector’s office mean that some residents are having property taxes levied on properties they sold over a year ago due to a backlog. The problems go on and on. Residents should be outraged.

“We are in contract negotiations now, and county management are not treating the causes of the staffing crisis with the seriousness they deserve. A hiring bonus will do nothing to retain the staff they already have and won’t replace competitive wages for job seekers. So far they have not even been willing to address major safety issues on the job that are putting employees and residents alike at risk. We want to make sure the Board of Supervisors hears directly from us what is really going on and how it can be addressed.”