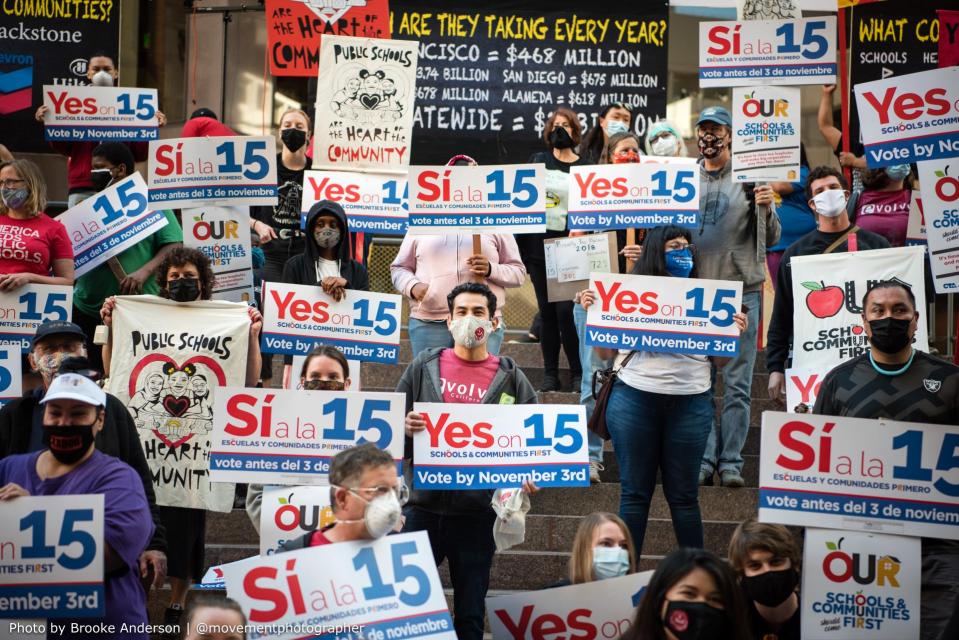 San Francisco educators, joined by SEIU 1021 members, brought their classrooms, both literally and figuratively, to the steps of the Trump-owned Bank of America building in San Francisco Monday morning to educate the community about money they say is being stolen from their schools and students.

This is money could be restored if the statewide ballot measure Proposition 15, also called Schools & Communities First, is passed this November.

“With just the money being stolen in taxes by Trump on this one building alone, $11 million dollars a year, we could hire 55 more registered nurses at the depart of public health in San Francisco,” said Jennifer Esteen, SEIU 1021’s Vice President of Organizing and a Registered Nurse who has worked for the San Francisco Department of Public Health for the last decade. “With 55 more nurses we could end unsafe staffing, we could ensure that every single unit at Laguna Honda Hospital, San Francisco General, and at all our city clinics could be fully staffed just based on the money from this building alone. I am appalled at how much money our state has been deprived of for the last four decades. As a registered nurse I know what it means for my patients to not have housing, to have difficulties getting medication, to be unable to get provider access on the weekends. We could fix all of that by voting YES on Prop 15.”

During their outside classroom lesson educators were also joined by nurses, parents, students, seniors and City Supervisor Dean Preston to talk about the millions San Francisco loses every year that could be going to fund schools, hospitals, housing and other social services. They pointed out that while San Francisco is losing at least $360 million every year in desperately needed funding, this problem isn’t just unique to here.

“It’s really difficult for me to imagine a world where it seems fair for people like Donald Trump to gets additional $11 million every year when we’re  struggling to meet the needs of our communities during a pandemic,” said Leslie Hu, the social worker and community school coordinator at Martin Luther King Middle School. “When COVID hit we were setting up GoFundMe pages to help with rent and food assistance for our students and families. We all see the news, Trump isn’t paying his taxes while working people lose out. It’s time that we reclaim that money and use it to help stabilize our schools and communities.”

Collectively statewide, according to research done by the Yes on 15 campaign, schools and local city governments are losing $12 billion a year. They pointed out using their homemade chalk boards that corporations like Chevron, Shell and Disney are benefiting along with Trump from this loophole.

“When I was a student in SFUSD schools most of my class sizes were well over 30, and sometimes up to 40 students. We would share textbooks, and often teachers would have to go to classes next door to get a chair. But as I got involved in Prop 15, I learned it doesn’t have to be this way. Corporations have been skimping on their taxes for over 40 years. They constantly tell us that we don’t have enough money. But we do have enough, just look at how much they are stealing from us. We deserve to be funding art programs, and cultural literacy, and more,” said Nevin Chin, recent graduate of SFUSD public schools and former youth leader at the Chinese Progressive Association.

Prop. 15 is a November ballot measure that will close corporate property tax loopholes to
reclaim nearly $12 billion every year for schools and critical local services – all while protecting homeowners, renters, small businesses, and agriculture. Prop. 15 will also cut business personal property taxes for small businesses. An analysis of Prop. 15 showed that only the top 10% of commercial and industrial properties will generate 92% of the revenue.