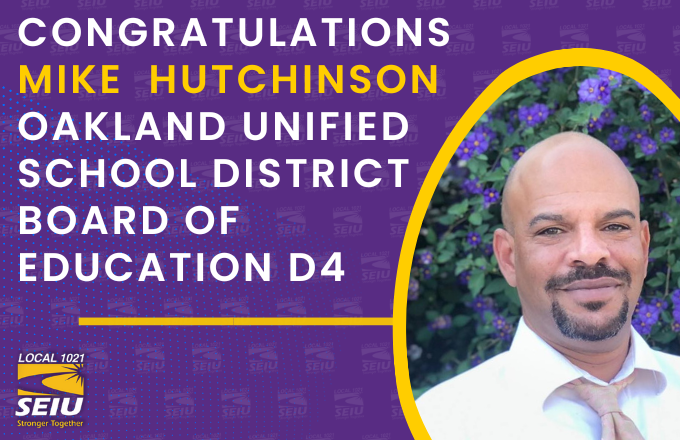 December 28, the Alameda County Registrar of Voters contacted current Oakland Unified School District Board of Education District 5 Director Mike Hutchinson to notify him that there had been an error in the way the ranked-choice voting system had been set up.

According to the rules, ballots missing a first choice but containing responses for second and third choices should be counted, with second choice moved to first, third to second, etc. However, ballots missing a first choice but containing second and third choices had incorrectly been discarded. After re-tabulating the votes, the registrar determined that Hutchinson actually won the District 4 election. Friday, Hutchinson filed a lawsuit to have the incorrect election result overturned to reflect the will of the voters.

“We often say that elections have consequences; the consequences in this race are profound,” said SEIU 1021 President Theresa Rutherford. ”As a current OUSD school board director for District 5, Mike Hutchinson has taken a stand to protect Oakland schools serving predominantly Black and brown children from closure. School closures can do irreparable harm to Black and brown communities, the children who are displaced from their community schools and their families, and the staff and educators in those schools.

“That’s why SEIU 1021, which represents OUSD’s classified staff – the people who keep Oakland schools clean, safe, and running smoothly – reached out to thousands of voters by phone and at their doors in support of Mike Hutchinson. We congratulate him on his win and look forward to working with him and the whole school board to improve public education in Oakland.”