Save the Supreme Court 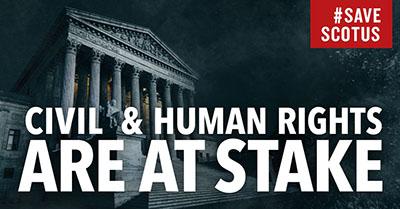 Today the Senate began Judge Brett Kavanaugh’s confirmation hearing to serve as the next Supreme Court justice. If confirmed, Brett Kavanaugh would turn our nation’s highest court into a weapon against working people by ruling based on politics or who has the most money and power.

We need fair-minded justices who understand that the law should provide everyone with a level playing field and know that everyone is created equal. If confirmed to the US Supreme Court, Judge Kavanaugh would tilt the Court and take away the things that our families hold dear: healthcare, voting rights, union rights, women’s reproductive health, human rights for immigrants, clean air to breathe and clean water to drink.

Take action. Call your Senator this week and urge them to vote NO on Judge Kavanaugh #SaveSCOTUS 1-866-426-2631

Judge Kavanaugh’s record makes clear that he would be a rubber stamp for the president, including his crusade to sabotage our healthcare. His nomination has been pre-approved by an extreme group that wants to repeal the Affordable Care Act with no replacement. If the ACA is struck down, protections for 130 million Americans with pre-existing conditions would be at risk.

The next Supreme Court justice will play an incredibly important role in shaping laws that will impact working families every day for generations to come. Almost every aspect of American life, human rights, personal liberties and freedom is at stake.