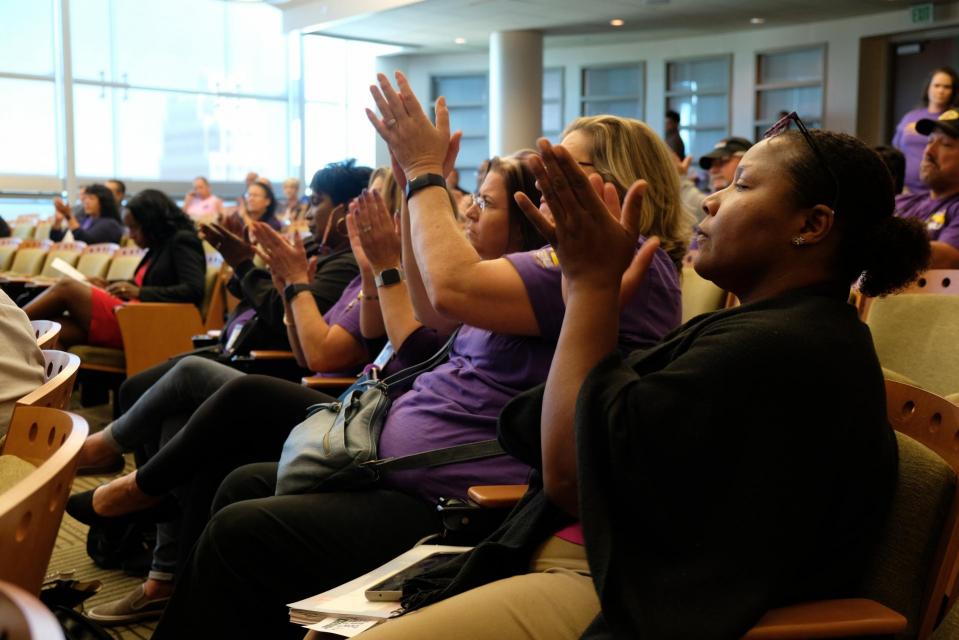 On Tuesday, October 8, over 100 workers representing over half a dozen of San Joaquin County’s unions confronted the Board of Supervisors and condemned the mismanagement of services which is harming County residents.

Members of SEIU 1021 & 2015, California Nurses Association, Union of American Physicians and Doctors, the District Attorney Investigators Association, and others stood together. Collectively, the work of these San Joaquin County employees touches every corner of our community.

The austerity imposed by County Administrator Monica Nino and endorsed by the Board puts the health and safety of the community at risk due to understaffed services and a systemic lack of resources.

“San Joaquin County workers are committed to doing everything it takes to win proper funding for the public services this community depends on. If the Board of Supervisors isn’t interested in addressing understaffed services and our community’s suffering, we’ll focus on electing representatives who are,”said Taffie Walter, a Chief Psychiatric Technician and SEIU 1021 member.

“In the meantime, our members have voted overwhelmingly to authorize a strike if CAO Monica Nino and this Board continue disregarding the needs of San Joaquin County.”

Since 2011, the County’s General Fund balance has more than doubled from $127.66 million to $300 million, including over $100 million in unassigned dollars. Yet 85% of County union workers are currently without contract under the misguided leadership of CAO Monica Nino, while high vacancy rates and a lack of investment in services leave people struggling to safeguard the health and wellbeing of their families.

On Tuesday, workers announced that their respective unions had declared no confidence in Ms. Nino by vote and consensus. They called on the Board to relieve Ms. Nino of her duties, and demanded that the Board show that they value the contributions workers make to their community by settling all outstanding contracts.