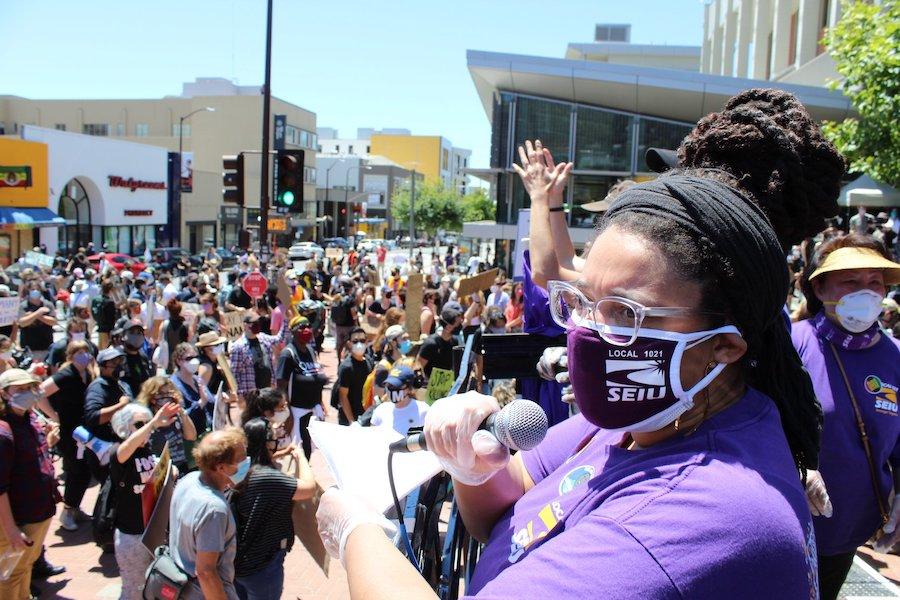 In Contra Costa County, SEIU 1021 members demanded that the Contra Costa County Board of Supervisors rescind their decision to hire current San Joaquin County County Administrator Monica Nino as the new Chief Administrative Officer. The members were joined by a coalition of union workers representing some 8,000 workers, as they spoke out at the Board of Supervisors meeting last Tuesday, December 8.

Megan Escudero, a welfare fraud specialist for San Joaquin County and longtime SEIU 1021 shop steward, said, ” When Monica Nino was San Joaquin County’s County Administrator, she took home big raises while County employees who provided welfare services were eligible to receive welfare themselves. There’s something wrong with that. Her actions in San Joaquin County showed her to be a union-buster who undermines working people. We deserved better, and so does Contra Costa County.”

Kelly Mertz, a Trauma RN at San Joaquin General Hospital, said, “Under Monica Nino’s leadership San Joaquin County has had the most labor unrest in the history of San Joaquin General Hospital. Ms. Nino’s anti-union, anti-worker leadership has led San Joaquin County to spend nearly $8 million dollars on temporary strike replacement workers (over two CNA nurses strikes), which they used to unjustly prevent nurses from returning to work and violated our Memorandum of Understanding, leading to at least one unfair labor practice charge against the County. Ms. Nino’s waste of tax payer dollars would be much better directed towards the community and the only trauma and safety net hospital in San Joaquin County instead of fighting its employees.”

The Contra Costa Board of Supervisors now knows that all SEIU 1021 members will stick up for one another, all across Northern California. As Megan Escudero said, “As union members, we look out for one another no matter where we are.”