In Oakland and across Alameda County, SEIU 1021 hits the streets to support candidates who support working families 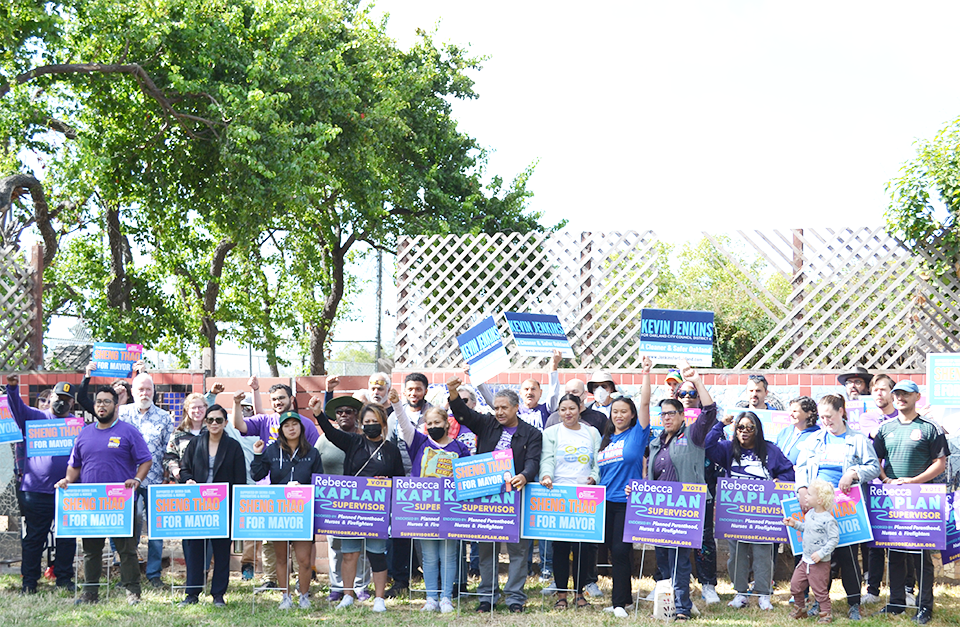 The upcoming election has big implications for working people in the East Bay. Out-of-town billionaires are trying to elect another so-called moderate as Oakland’s mayor and shift the balance of City Council away from the current progressive majority, which has invested in innovative new public safety programs like MACRO and agreed to a historic contract with a 14% Cost of Living Adjustment (COLA) over three years. One of the progressive leaders on City Council is Oakland District 4’s Sheng Thao, who has long supported SEIU 1021. On Saturday, September 17, SEIU 1021 and other community members rallied in Oakland’s Allendale Park to support Sheng Thao for Oakland mayor and Rebecca Kaplan for Alameda County District 3 Board of Supervisors.

Sheng Thao told the crowd, “We know we have a very important election to win. For way too many years, the City administration has not cared about us workers–and I say ‘us workers’ because I used to be a Local 21 member! I remember going on strike right before Christmas. Why did we have to go on strike in order to feed our babies, and our families? It’s unconscionable! We know that it costs a lot to work here in the City of Oakland, and we want you to be able to live here, work here, play here, feed your kids, and that is just the beginning. I know you all deserve so much more. I’m in this fight for the little guy. I believe if you lift from the bottom, you lift everyone up! I’m honored to have you all here. We’re going to win this!”

SEIU UHWW member Alfred Lahud has been a janitor in downtown Oakland for 24 years. On Saturday, he showed up and spoke out, saying, “As brothers and sisters, we have to be supportive of one another. We have to fight for a better life in our jobs so we can support our families, and we have to fight for what’s important. We have to support both of these candidates so we can support our communities.”

Rebecca Kaplan, Oakland’s at-large City Council member, said, “I know that we don’t accomplish any of our important goals by ourselves. We need to build a stronger and healthier future that respects workers, that respects public service, that funds vital, core community needs, and invests in the services that our communities deserve. Services like our parks. Services like clean streets. Services like making sure there are people there to answer the phone when members of the public call needing help. We need to make sure our workers are treated with dignity respect and sufficient staffing levels to get the work done. We need to make sure we protect our democracy and reach out to the voters so that they know about this important election. What we’re seeing here today — this is what solidarity looks like!”