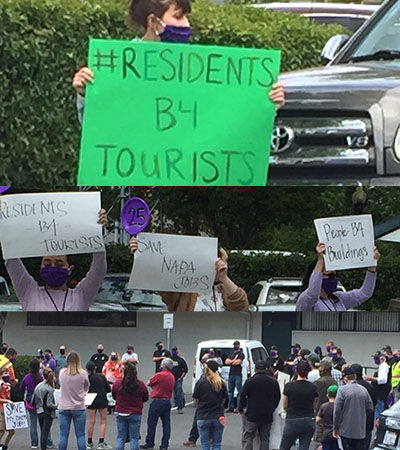 On Tuesday, May 19th, over 50 Napa members and community supporters conducted a social distance action at City Hall to protest the elimination of 39 positions including 26 active employees. These unjustified layoffs would mostly impact the Parks and Rec department.  Our research revealed that the city has operated at a surplus for the past 7 years and has no valid reason for layoffs.

The ripple effects of these layoffs would be felt throughout the city. “They’re not considering the real impacts of these cuts on the members of our community.  The damage done by implementing this decision will take years to rectify,” says Matt Dunnachie, a Parks employee for over 2 years. “When my wife and I were a younger family we utilized all those services like swimming lessons and summer camps. All the activities that were available we utilized and we appreciated them. If you don’t have that you don’t have much of a city.”

The outdoor action was followed by an onslaught of emails that were read aloud during the public comment portion of the meeting. Many members shared similar statements, demanding accountability and transparency from city officials. “We’re out here protesting in support of our fellow workers and our community,” said Ana Garibay, an office assistant for the Napa Police and Fire Departments. “I’m proud to stand with my union and fight for what’s right.”

City workers and community members have continued their efforts beyond the City Hall by organizing a petition to Save Napa Parks and Rec which currently has over 6,300 signatures. Help them get to 10,000 signatures by signing the petition today.