Mills College Staff, Adjunct Faculty, and Students Rally and March for a Just Transition as Northeastern University Acquisition Looms Despite Mills’ administration’s claims that the acquisition will preserve the college’s character and prevent layoffs, they have been unwilling to put their promises in writing, and early signs from Northeastern are not promising—and staff and adjuncts ar 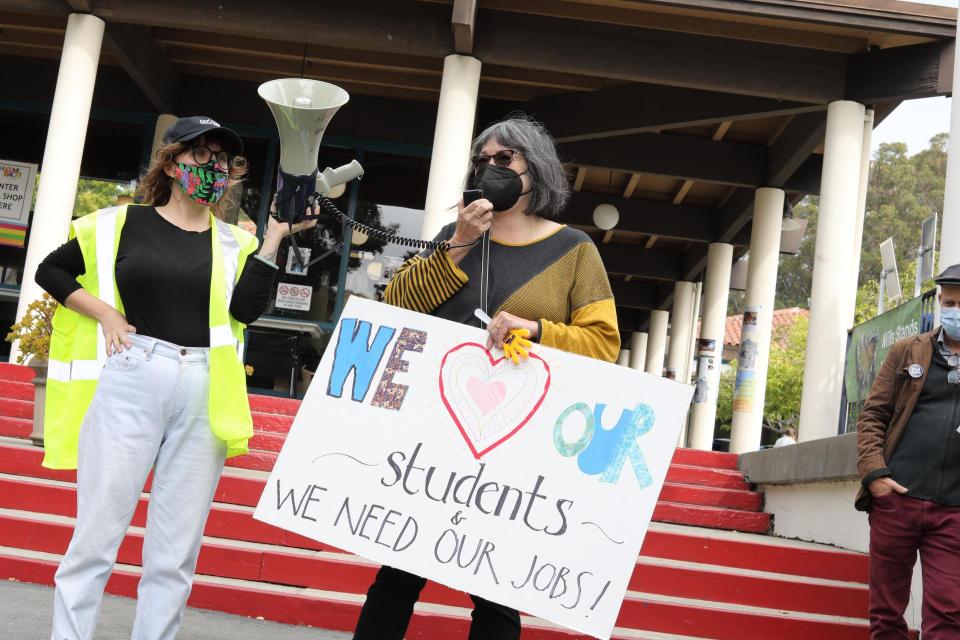 As Mills College, the beloved 170-year-old Bay Area women’s college, barrels toward its future as a co-ed satellite campus of Northeastern University after its board of trustees voted in September to sell it, staff and the adjunct faculty who teach 75% of its courses are demanding a contract that honors their contributions to the college and paves the way for a just transition. Tuesday, they will gather alongside students for a festive, Mardi Gras-themed rally and will then march to Mills College President Elizabeth Hillman’s house on campus to participate in a candlelight vigil hosted by alumnae groups.

WHAT: Mardi Gras-themed rally and march, concluding in candlelight vigil

WHERE: Rally begins at 5pm in Holmgren Meadow at 5pm, followed by a march through campus and ending with candlelight vigil in front of President Hillman’s on-campus house

WHY: Mills staff and adjunct faculty demand a fair contract and a just transition as Northeastern takes over this year

“Mills is much more than just the physical campus,” said David Buuck, an adjunct professor at Mills College since 2009. “The staff and faculty—including the non-tenured faculty who teach most courses at Mills–make Mills the unique college it is. But we have not received any commitment whatsoever that we will still have jobs next year, or that Northeastern University will recognize our unions and negotiate in good faith towards an equitable transition, where job security, living wages, and a meaningful seat at the table can best serve whatever Mills-Northeastern becomes.”

Mills’ current administrators have pushed the college into its current situation by prioritizing excessive administrative spending while cutting instructional spending and laying off faculty—so much so that by 2019 they were spending more on administration than instruction. Instead of seeking to balance the budget by reigning in administrative spending to the average level of its peer colleges and universities, they have insisted that the only way to “save” Mills is to sell it. Publicly, President Hillman has claimed that the move will save programs and prevent layoffs. In reality, neither Mills nor Northeastern has been willing to put any such assurances in writing. In fact, at a faculty town hall just last week, administrators announced that Mills cannot offer any majors that compete with majors offered on Northeastern’s Boston campus—meaning departments such as biology and English will be decimated, while current students may find themselves unable to complete degrees in their chosen majors.

Mills College staff voted by nearly 95% in March of 2020 to join adjunct faculty, who teach 75% of courses at Mills, in SEIU 1021. Yet nearly two years later, they still do not have a first contract, as administration has hidden behind notorious union-busting lawyer Mike Vartain—who leads negotiations for administration at California College of the Arts as well, where staff went on a four-day unfair labor practice (ULP) strike in February—who uses stonewalling and delay tactics to avoid reaching a fair agreement. Mills staff are also considering an unfair labor practice strike to push administration to settle a fair contract that sets a precedent as Northeastern takes over. While adjunct faculty have a current collective bargaining agreement in place, they too demand assurances that they will keep their jobs and that their contract will be honored by Northeastern—which both Mills and Northeastern have so far refused to provide.

“After nine months of bargaining, at a time when staff with unstable futures have been given the monumental task of transferring ownership of the college, Mills responded to the staff union’s economic proposals of modest raises and better severance with a wholesale rejection of every article,” said Brendan Glasson, technical director of the music department. “Mills uses the language of social justice while ignoring the very real needs of the people it employs. We want the president of Mills and the board of trustees to know that staff didn’t unionize with 94% of the vote in order to maintain the status quo–we did it as an expression of mutual aid with our colleagues. Labor justice is social justice.”