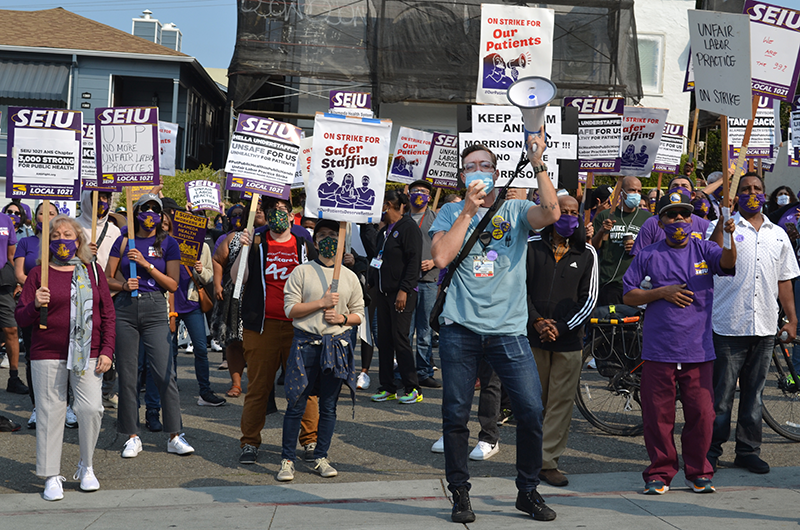 Healthcare workers at Alameda County’s safety-net hospital system, Alameda Health System, have been fighting for better patient care and safer conditions for workers for months. They have stood against the system’s mismanagement and underfunding and called for the removal of the unelected Board of Trustees and overmatched CEO Delvecchio Finley, so that the community can receive the healthcare it deserves and the workers don’t have to fight understaffing, constant PPE shortages, and layoffs that leave our whole community less safe.

Management dug in and refused to listen, and came after these healthcare workers at the bargaining table and in the workplace with many unfair labor practices, including refusal to bargain in good faith, layoffs and retaliation against union members, and firing whistleblowers. The workers united in SEIU 1021 finally said “Enough!” and announced a five-day strike, starting on October 7 and ending at 7 a.m. on October 12.

The five-day strike was across hospitals and clinics across Alameda County: Oakland’s Highland Hospital, San Leandro and Fairmont Hospitals, John George Psychiatric Pavilion, and clinics in Newark, Eastmont, and Hayward. At every one of these locations, workers and community members gathered to show their solidarity and passion for ensuring that Alameda Health System provide high-quality healthcare to the community’s working families, and a fair workplace for its employees. There were also daily rallies, car caravans, and online activities throughout the strike. 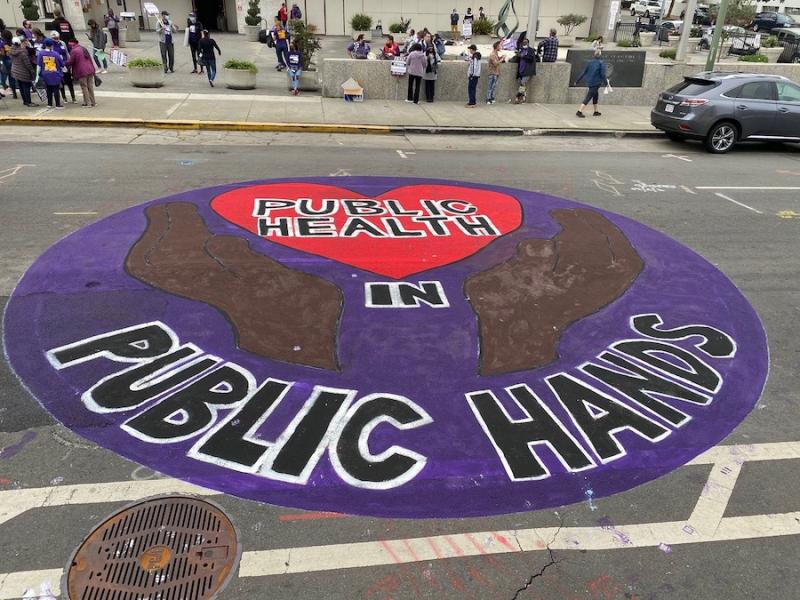 On the second day of the strike, workers, elected officials, and community members rallied at the Alameda County Administration Building, and painted a mural illustrating their demand that the County Supervisors take control of AHS and put public health in public hands.

Because of the strike, and because of incredible displays of unity, healthcare workers at Alameda Health System are winning. The elected bargaining team had been meeting with management since January, but management hadn’t budged from their demands to tear up the existing contracts and start from scratch, with no protections for safe staffing levels, worse benefits, and easier layoffs. At the same time, management issued shocking layoff notices to vital personnel, including the interpreters who allow the most vulnerable members of our community to access healthcare and the community health outreach workers who counsel victims of sexual assault in the emergency room.

None of this was acceptable, so the bargaining team asked the members for a strike authorization vote. This resulted in a four-day strike vote across hospitals and clinics throughout the system. Turnout was massive, and when the votes were in, they were 98% YES votes in favor of authorizing a strike. As a direct result, AHS management removed Athena Buenconsejo, their Director of Labor Relations, from their bargaining team, signaling a major change in direction from management.

The wins didn’t stop there, however. On the second day of the strike, members of the County Board of Supervisors came to a large rally at the Alameda County Administration Building in downtown Oakland. At the rally, Board of Supervisors President Richard Valle told the AHS Board of Trustees, “Thank you for your service. It’s time to move on.”

During the strike, AHS finally hired a new negotiator to bargain with the elected bargaining team. The first bargaining session was Monday, and the team reported that there was a big change from the past nine months. This session featured meaningful, respectful conversation on both sides. AHS listened to workers about the issues on the table, and committed to rebuilding relationships and establishing trust between management and workers. Bargaining team member Halley Darigan, a nurse at Highland Hospital said, “It finally actually feels like a new day at AHS.”

All of these changes are because of the strike. Workers used their power together, with the community on their side, got great press coverage, and now they are winning.

We have seen a significant shift from management in the wake of our strike, but are committed to continuing our fight until we win the contract workers and patients deserve.