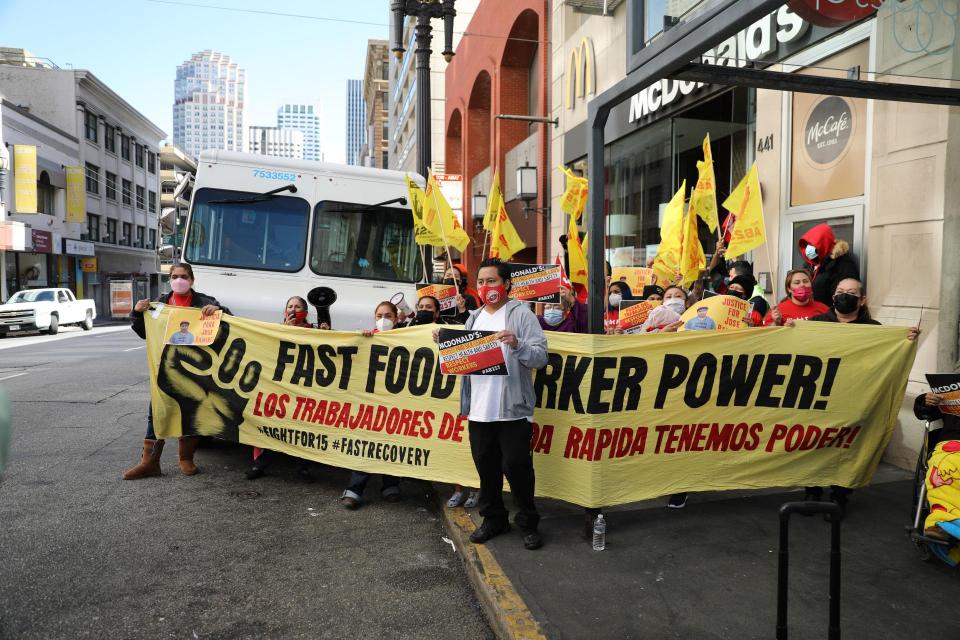 Hot off the victory of AB 257 – the Fast Food Accountability and Standards Recovery Act or FAST Recovery Act – passing the California State Assembly, fast-food workers took to the streets for another protest against harsh workplace conditions, including worksite violence and wage theft.

At the protest in front of McDonald’s in San Francisco, Sofia Lima, a worker at McDonald’s for five years and a leader with the Fight for $15 and a Union movement, spoke about the issues facing fast-food workers: “While McDonald’s and other corporations make billions in profits, many fast-food workers are denied sick leave. Being denied paid sick leave creates tremendous burdens on our ability to pay for necessities like rent, food, and transportation for our families. McDonald’s and other fast-food employees already make the lowest wages of all industries. It’s already difficult enough getting by on minimum wage, especially with the rising prices in California. My colleagues at this McDonald’s have been consistently denied COVID paid sick leave; my co-workers and myself have faced these same issues at our McDonald’s.”

Jose Ramirez, a fast-food worker with ten years of experience, was fired from his McDonald’s job after informing his managers about the new legislation that extends sick leave protections and demanding paid sick leave. Despite the personal setback, Ramirez is more determined than ever: “Fast-food companies’ attempts to silence workers like me only inspire us to fight even harder until we win the safety and dignity we need during this pandemic and the union rights we’ve been fighting for nine years. To all fast-food workers: Be courageous and strong. Let’s stay united so that we can continue to defend the rights of workers. We will continue to hold McDonald’s accountable for improved treatment of workers.”

Lima closed out the protest with a call to action to all fast-food workers: “To all of the fast-food workers here and across the state: Don’t stop fighting, don’t get tired; let’s not lose our rights as workers. We will not be silenced. We will not be intimidated. We know our rights, and retaliation is against the law. Let’s keep going with Fight for $15 and a Union; we got this! We must stay united and continue taking action to help pass AB 257 – so that essential workers like ourselves will get the benefits that we need. Having AB 257 will ensure that we have a voice at the table, that we are valued as workers, and that we get the benefits we deserve.”