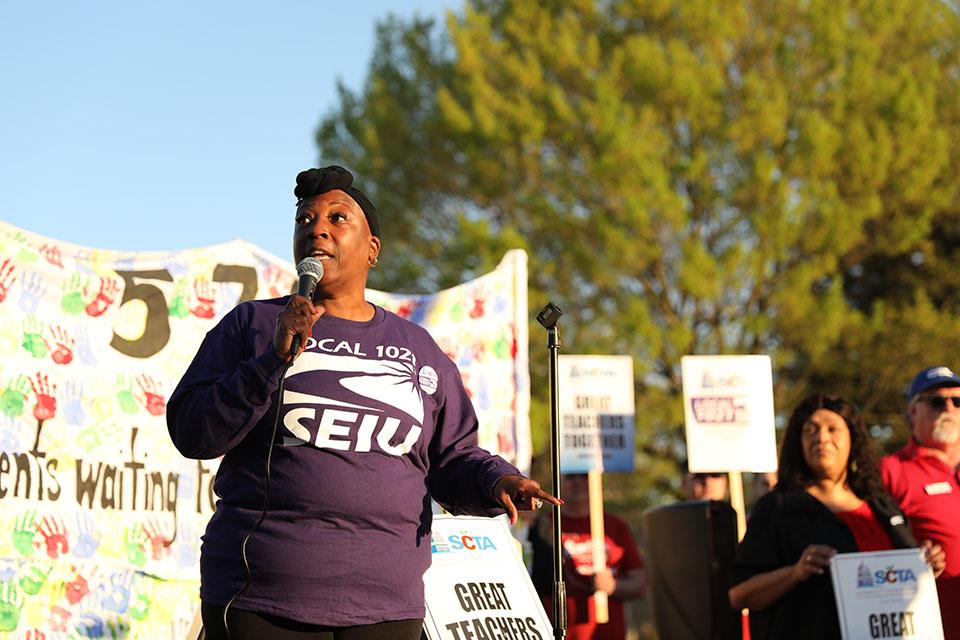 SACRAMENTO –A strike by 4,600 Sacramento teachers and other school workers, members of the Sacramento City Teachers Association and SEIU Local 1021, enters its second day Thursday. No contract talks were held on Wednesday and no talks have been scheduled.

Today, Thursday, March 24, at 11 am, hundreds of Sac City teachers and school staff, joined by parents and community supporters, will hold a districtwide rally to demand that SCUSD’s administration serve students’ needs, address the growing staffing crisis, and bargain contracts in good faith. The rally will be held in front of the Sacramento County Office of Education (SCOE), located at 10474 Mather Blvd., in Mather, CA 95655.

The Sacramento City Teachers Association has been very clear about the steps necessary to move forward:

At the same time, the district has also refused to meet with SEIU Local 1021 and has not scheduled a meeting with the classified staff until March 30.

“Our bus drivers, the first people the kids see in the morning, have been depleted by over 50%,” said SEIU 1021 SCUSD Chapter President Karla Faucett at today’s rally. “We have instructional aides having to help write curricula because we’re so short-staffed on teachers. We have kids smashed in gymnasiums, supposedly getting a quality education. We have custodians who cannot get the schools clean. Where we used to have 16 at a site, we now have two or three. And now they’re asking them to cross over to other school sites. As for bargaining, we’ve been at the table since October. And the district has made not one proposal for classified staff. Not one. We’ve been ready to go to the table 24 hours a day. We have requested the District bargain with us since Friday, and their response was, ‘We’ll see you on the 30th.’ We cannot continue this. We want them to come to the table.”

“The SCUSD school board has no sense of urgency,” said David Fisher, SCTA’s president and a second grade teacher. “The district didn’t meet with us last weekend, they barely showed up on Monday. And since the strike began, they have been missing in action.”

Money shouldn’t be an issue. SCUSD has received an infusion of $320 million in covid-related federal and state dollars. The district now receives over $20,000 per student per year and has a record reserve fund of $123 million dollars.