California College of the Arts Workers’ 4-Day Unfair Labor Practice Strike Continues in Front of Oakland Campus Slated to be Developed as Luxury Housing After a successful first day on the picket lines, CCA staff, with the support of faculty and students, are ready to hold the lines at the campus being closed as part of a risky real estate deal that jeopardizes the college’s future and legacy 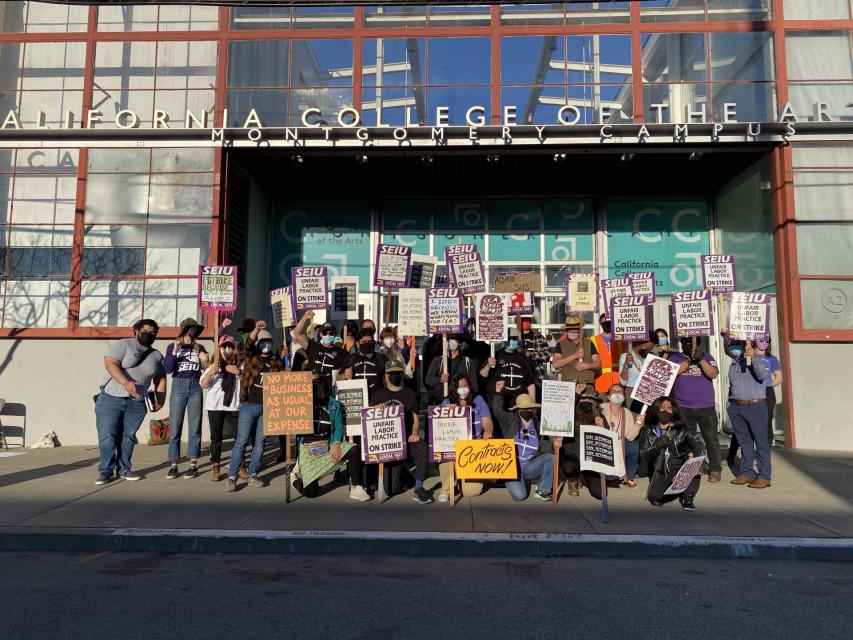 Yesterday, hundreds of California College of the Arts (CCA) staff, faculty, students, and supporters picketed for nine hours outside the Potrero Hill campus in day one of the first strike at a private arts college in the nation since 2012–and the first strike at a private college in California since a one-day strike at Pepperdine in 1976. Today, the strike continues, this time in front of the Oakland campus at Clifton and Broadway that administration and the Board of Trustees are closing and selling off. At issue: numerous unfair labor practices—violations of federal labor law—that CCA administration has committed as they stall and delay in negotiations for the staff union’s first contract.

The strike could have been avoided, had CCA administration decided to get serious about reaching agreements on their employees’ key priorities after they voted by 97% to authorize a strike in December. Instead, classes have been cancelled, studios and facilities shuttered, services interrupted, and their staff, faculty, and students are speaking out to news media and on social media. “We’re here to support staff who are being paid unfairly,” said CCA student Tariq Stone, who joined the picket lines in San Francisco on Tuesday. “I think it’s really important that we are paying for this school so the people teaching us should be paid fairly and be comfortable in their environment. It’s not a good situation where they’re not getting paid enough, and now they have to strike, so we’re missing classes.”

CCA staff will continue to hold the picket lines from 8am to 5pm outside the San Francisco campus every day this week after today (Wednesday), when the picket lines will be outside the Oakland campus. They will hold a rally at noon today, as well as artistic activities related to the strike at various times throughout the week. Adjunct faculty are participating in a sympathy strike, cancelling classes and joining the picket lines. Monday, an overwhelming majority of ranked faculty members signed a letter to CCA administration urging them to settle a fair contract with staff and adjuncts and pledging not to cross the picket line, instead participating in strike-related teach-ins and pedagogical activities.

The impending strike has also met an outpouring of support from students and alumni, who have sent hundreds of emails to administration urging them to settle a fair contract immediately. At least 15 local elected leaders, including nine of the eleven members of the San Francisco Board of Supervisors and Assemblymember Mia Bonta, have publicly urged CCA’s administration to settle a fair contract with staff and adjunct faculty. SF District 6 Supervisor Matt Haney spoke at yesterday’s rally. “We are 100% united behind you. The fact that folks have been negotiating for 2 years in good faith and have yet to be offered a fair contract—shame on you, CCA. Shame on you. When we have people in our city educating our young people and you are paying them poverty wages, that affects all of us. That is unacceptable,” said Haney to cheers from the strikers.

Key priorities that administration has not adequately addressed in contract negotiations include livable wages—though CCA President Stephen Beal is paid more than any other administrator of a private Bay Area college, behind only the president of Stanford, roughly 2/3 of full-time staff are considered low-income by Bay Area cost of living measures—and job security, as well as input into decision-making. CCA’s economic proposal keeps many workers living paycheck to paycheck, and is far below the rate of inflation. Salaries for the entire unionized workforce is less than 10% CCA’s $108 million budget, and the raises proposed would cost less than 1% of CCA’s budget.

Instead of investing in its own workforce, CCA has decided to tie up its money in a “campus unification plan” — a real estate venture similar to those that recently bankrupted and nearly shut down San Francisco Art Institute and Notre Dame de Namur University in Belmont. This situation underscores the need for involvement in institutional decision-making. CCA’s Potrero Hill campus, has already been mortgaged as collateral for $30 million in debt the tuition-dependent college has no realistic way to repay, given their actual fundraising record. CCA staff and faculty have long been sounding the alarm about how the plan endangers the institution, its programs, its students, and ultimately its legacy—to no avail.

“CCA doesn’t like having to answer to a unionized work force. They want to continue to do whatever they want, regardless of the effects on workers – especially during this transitional time as we say goodbye to the beloved Oakland campus and move all programs to San Francisco,” explained CCA Senior Library Technician Amber Bales. “President Beal and Provost Carland don’t think labor relations are part of their jobs, and CCA management thinks they can push around workers. It’s time to remind them that CCA doesn’t work unless we do.”

A GoFundMe strike fund to support striking workers who will suffer from losing their wages during next week’s strikes has already exceeded its $15,000 goal since it was set up by CCA staff union members last Wednesday.