California College of the Arts Staff, Adjunct Faculty Ratify New Contract That Will Provide Big Improvements Following February’s Strike The staff contract will boost the pay of CCA’s lowest-paid workers by 30-38% over the next 2.5 years; the adjunct contract includes raises, accelerated paths to promotion, retirement benefits, and increased job security. 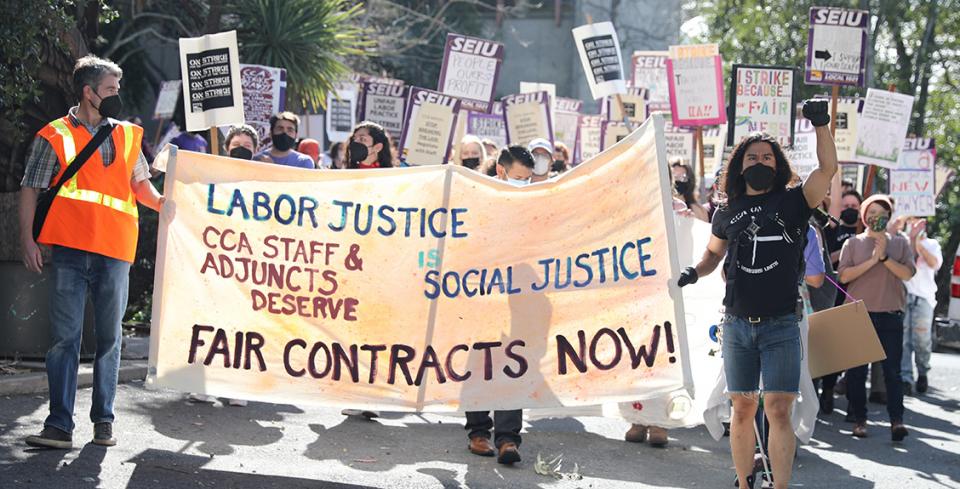 This week, staff and adjunct faculty at California College of the Arts voted overwhelmingly—by 98% and 96% respectively–to ratify the tentative agreements reached with administration in the wake of a four-day unfair labor practice (ULP) strike February 8-11. The contract is the first for CCA staff, who voted by a supermajority to form a union with SEIU 1021 in 2019, and the second for CCA adjuncts, who formed their union with SEIU 1021 in 2014.

“The thing that I’m most proud of in the new contract is that we established a minimum wage of $26 an hour, $50,700 a year. This not only represents a more than 30% raise for a few of our lowest paid coworkers but is a huge step toward something that’s been a goal for us since the beginning: living wages for all,” said Piper Alldredge, a studio manager who has worked at CCA for four years and member of the SEIU 1021 CCA staff contract negotiations team.

After nearly two and a half years of fruitless negotiations for a first union contract, with CCA administration’s team stalling, delaying, showing up unprepared, and refusing to negotiate in good faith, while continuing to make changes to working conditions they were legally obligated to negotiate with the union, CCA staff voted by 97% to authorize a strike. The adjunct unit participated in a sympathy strike, which was also honored by many students and ranked faculty.

At the time of the strike, CCA adjuncts had been in negotiations for their second contract for nearly two years, facing the same obstacles as the staff unit: Administration, led by notorious union-busting attorney Mike Vartain, refused to bargain in good faith through illegal—and unethical—tactics.

“One of the best things I saw come out of the strike and contract negotiations is the unbreakable solidarity between the adjunct and staff bargaining units,” said Randy Nakamura, an adjunct professor in the MFA design program and a member of the adjunct bargaining team.  “CCA did everything in its power to break and divide the union, but we did not waver. Staff and adjuncts might have separate bargaining units, but we are united as a union. This is a strong foundation for the future, and I hope to build upon our success to create an even better union culture.”

Some highlights of the staff contract, ratified by 98% of voting members, include a 5.5% raise over the next two years, with another three percent in year three to bring all staff up to a $50,700 minimum salary as well as equitable raises for the rest of staff; $1500 stipends in July 2022 and July 2023 for all workers currently earning less than $28/hour; more pathways to promotion; the right to negotiate over layoffs, including recall rights and severance pay; and more.

Highlights of the adjunct contract, ratified by 96% of voting members, include an 8.5% raise over the next three years; an end to “half-lines”—the practice of paying adjuncts only half the course rate for under-enrolled courses, which means that the difference of one student can result in a 50% pay cut for a given course, despite the fact that it does not take 50% less time or work to teach a smaller class; access to tuition remission and retirement benefits for adjuncts who are eligible for benefits; accelerated pathways to promotion; and more. View more highlights of both contracts here.

“Ending wage theft in the form of half-lines is I think the single most important accomplishment of the new adjunct contract. This ensures that the pay raise we fought for will in fact be a pay raise. I hope that going forward, the new contract will help create a better culture at CCA, so that adjunct labor is respected rather than treated as disposable,” said Nakamura.

“Working at CCA already feels so much different! Going on strike was a huge change in perspective, it just felt so different to walk in the door for my shift the week after the strike,” said Alldredge. “Plus, looking ahead toward campus unification, I know of people who were thinking of leaving CCA because they didn’t want to go through that process–there is a lot of uncertainty. But, with a contract in place, and a strong one at that, I think that will really change that calculus for people. CCA feels more like a place I could stay through a hard time like a big campus move because I know I have protections like just cause and effects bargaining, I know what will happen to my wages for the next few years, not to mention the fact that I’m invested in this thing that we’re building together–our union.”