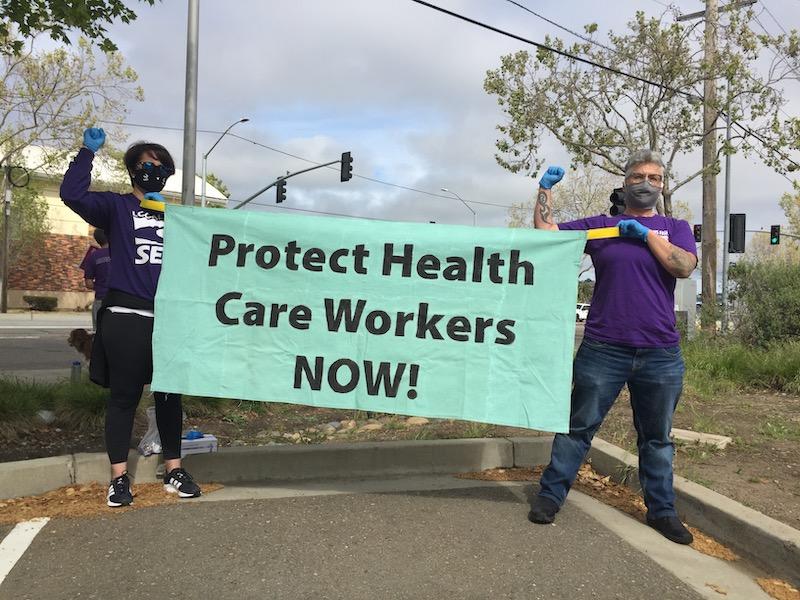 Alameda Health System is Alameda County’s safety-net public health system. It serves a mostly low-income community that is more than 70% Black and brown, and delivers more than 200,000 hours of patient care per year. As the COVID-19 pandemic has ravaged our communities, with more than 20,000 cases and 350 tragic deaths in the county so far, the system has been stretched to the limit.

Now, the 3,000 workers united in SEIU 1021 across AHS are stepping up to call for big changes to solve the system’s big problems. The pandemic has only made AHS workers more determined to fix the broken system they see, and on September 21, they began to vote on authorizing their elected bargaining team to call a strike. The vote will run from Monday, September 21 through Thursday, September 24.

As a public health system, AHS always struggles with underfunding. Unfortunately, it also struggles with mismanagement. Under CEO Delvecchio Finley, management has taken an aggressive stance against its own workforce, engaging in many unfair labor practices both at the bargaining table and in day-to-day operations.

Under Finley’s watch, AHS didn’t even sign the negotiated and agreed-upon contracts that ran from 2017 to 2020, and have tried to impose unilateral changes on those contracts. Throughout contract negotiations, his representatives have routinely failed to answer requests for information, with two dozen outstanding items stretching back to November 1, 2019, and have denied caucus time to SEIU 1021’s elected bargaining team members, and have even refused to allow some members time away from work to attend bargaining sessions.

AHS has spent massive amounts of public money trying to deny medical benefits for its own workers and their families, and has recently even begun to lay off healthcare workers in the middle of a pandemic. They are cutting services to the public, including translators and community health outreach workers who help victims of sexual assault in the emergency room. The pandemic has only made AHS workers more determined to fix the broken system they see, and on Monday they began to vote on authorizing their elected bargaining team to call a strike.

Even before the pandemic, SEIU 1021 members were speaking out, rallying outside their worksites, petitioning the County Board of Supervisors, and working with community allies and organizations to try to get AHS to address worker concerns and make the system a fair, safe place for the community to go for the healthcare that they so desperately need.

Veronica Palacios is an Eligibility Specialist II at Oakland’s Highland Hospital. She’s been there for 20 years. She says, “Our patients need a safe space to go to get the medical care they need, and as employees, we need a system that has our back in a time of crisis. Our community, from Oakland to Newark, deserves a safe place to go with employees they trust. I enroll patients with no medical coverage into country, state, and federal programs to help them with their bills so they can continue receiving medical care, and I personally have assisted generations of patients, grandmothers to mothers to grandchildren. We’re voting to strike because we’re fighting for patient safety.”