After a Five-Year Campaign, Adjunct Faculty and Lecturers at Santa Clara University Win Their Union and Vote SEIU 1021 as Bargaining Representative Union-Yes Votes Win in a Landslide (72.5%) in the National Labor Relations Board-Overseen Election 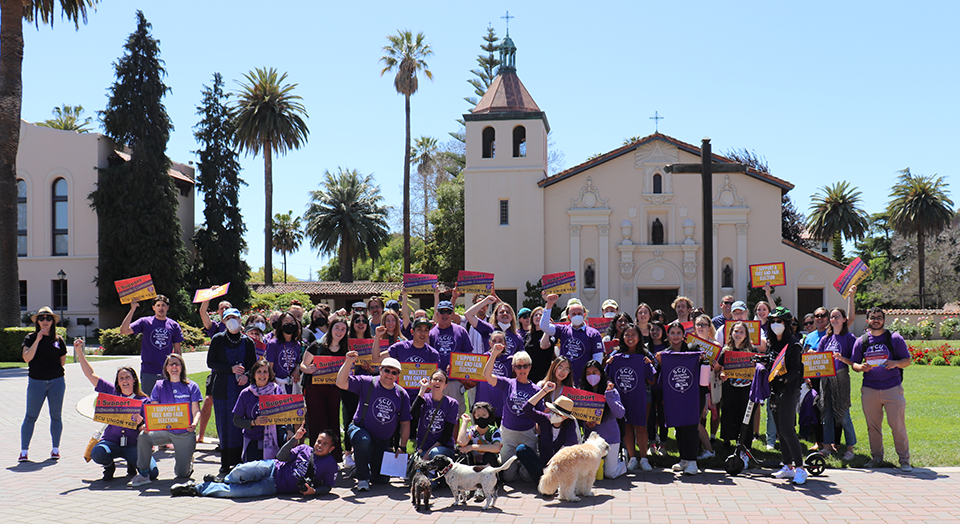 (Santa Clara, CA) After five years of union organizing, adjunct faculty and lecturers at Silicon Valley’s Santa Clara University voted on Tuesday, June 21, 2022 to be represented by SEIU 1021 and to form a union. These non-tenure-track faculty members teach the majority of the university’s courses, but many are required to re-apply to teach as often as every year, and struggle with precarious employment. Rising costs of living in the region have even pushed some lecturers into poverty and homelessness. In the face of these working conditions, the Adjunct Faculty and Lecturer Organizing Committee sought to form a union to make their work more sustainable.

This election win takes place in a period of renewed union organizing, alongside local victories like two new unionized Starbucks stores in Santa Cruz, and national wins like Baltimore’s Apple store, Amazon’s Staten Island warehouse, and the agreement under which Microsoft has committed to remain neutral when employees express interest in joining a union.

The effort to form a union was made more difficult by political and legal factors: during the Donald Trump administration, the National Labor Relations Board ruled that it did not have jurisdiction over faculty members at religious colleges and universities, in the Bethany College decision. This ruling meant that the usual path for forming a union, in which pro-union organizers call for an election that will be overseen by the NLRB, was not possible. Nevertheless, the adjuncts and lecturers continued their fight, including trying to negotiate a free and fair election directly with SCU’s administration, who had hired law firm Littler Mendelson. This firm has advised SCU, Apple, and Amazon in their efforts to “lawfully avoid unions.” This negotiation broke down, and still the fight continued.

In the NLRB election on Tuesday, June 21, the faculty voted overwhelmingly 245 to 93 to form a union, with 338 total ballots submitted and counted of a total eligible voting population of 544. The organizing committee said in a statement: “SCU adjunct faculty and lecturers have voted by a landslide (72.5%) in favor of a union! Many thanks to all of you who participated in the vote, who asked questions, came to meetings, talked to colleagues, came to rallies and teach-ins, posted flyers, signed cards, and wore t-shirts and pins. We are in this together and now we will have a voice at the table with the administration!”

Andy Wolfe, a lecturer at SCU and a member of the Organizing Committee, said, “It’s a big win for all the faculty at Santa Clara. We’ve been working towards this day for years, and we’re not surprised by this outcome. We’ve been talking to our supporters and hearing their enthusiasm, and when it came time to vote, they showed up! We really feel that this result is representative of what the faculty wants, and we hope the administration takes this vote as a signal of what the faculty expects from them.”

“We’re looking forward to working cooperatively with the administration for a new contract. We’re going to go talk to our members and survey them to set our priorities together and elect a team to represent us at the table.”

Brandon Dawkins, SEIU Local 1021’s Vice President of Organizing, said, “This win is a great testament to the work we do as a union. It was a very long campaign, and we encouraged them to stay in the fight, with years of talking to folks and organizing, because it’s our job as the labor movement to bring all workers up! If we’re not engaged in bringing all workers up, our movement will die. We have to fight for every worker to get the things they need, like a living wage, healthcare, and a voice in the way their employer operates. As workers, we’re the engines that make our organizations run, and we’re proud to help bring these adjuncts and lecturers into our movement.”

The newly won union chapter will next survey their members to understand their needs, and elect a team of representatives to negotiate a contract with Santa Clara University. In a statement emailed to faculty, SCU administration said, “Under the rules we agreed to, the University will recognize the union and begin the collective bargaining process with the SEIU to achieve a mutually agreeable contract.”

The SCU Adjunct Faculty and Lecturer Organizing Committee (AFLOC) has worked with SEIU Local 1021 since 2017 to organize a union at Santa Clara University.