Advice to educators, staff, and parents: Prepare for a strike.  “The district’s actions make it look inevitable.” 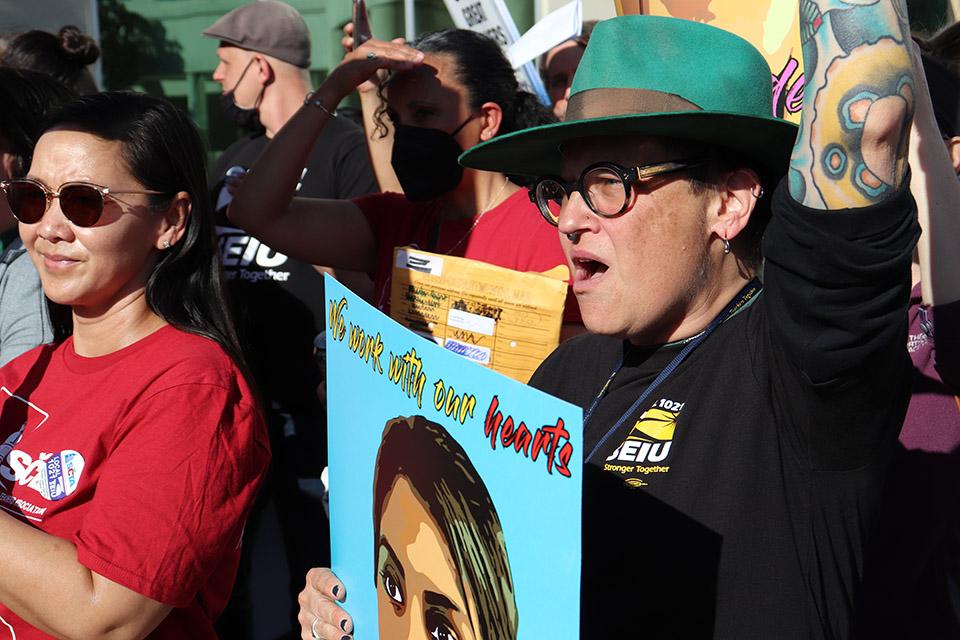 Negotiators for SCUSD after failing to return to the bargaining table over the weekend come unprepared, stay briefly, and offer lackluster concessionary proposal that fails to address staffing crisis – and still have offered no bargaining dates at all with SEIU 1021 this week.

SACRAMENTO –The contract negotiations between the Sacramento City Teachers Association and the Sacramento City Unified School District that resumed Monday afternoon failed to address the staffing crisis that has left 10,000 Sac City students without a permanent teacher, bringing the district one step closer to a strike.

After one hour of negotiating, district negotiators left “to caucus” and never returned. A state mediator had to call off the bargaining session in the absence of the SCUSD representatives.

“The district has misplaced priorities and no sense of urgency,” said SCTA president David Fisher.

Last week, an independent review by a fact-finder chosen by both parties under the auspices of the California Public Employment Relations Board sided with the union on staffing and wage issues and their correlation to serving students. The neutral factfinder found that teacher salaries and benefits are “clearly relevant to recruitment and retention of staff.”

SCUSD’s negotiating team had refused to meet with SCTA over the weekend, stating they had to review the fact-finder’s report. They also never responded to SEIU 1021’s request to bargain over the weekend; the only bargaining date they have given to SEIU 1021, which represents 1800 classified staff, including school bus drivers, custodians, instructional aides, nutrition service workers, and others, is March 30—seven days into the strike.

Despite a written commitment to “follow the factfinder’s recommendation to the maximum extent possible,” SCUSD’s negotiators in Monday’s brief bargaining session refused to address the staffing crisis, which is the central issue facing the district.

Instead, in a clear act of bad-faith bargaining, SCUSD violated the ground rules set by the mediator by releasing its proposal in a press release.

The district’s bargaining team demanded a massive rollback in educators’ health insurance benefits that would force employees to pay up to an additional $12,000 per year for coverage. The district would then use healthcare savings to fund a small wage increase, well below the rate of inflation.

To date, SCUSD management has still not responded to proposals that SEIU 1021 put forward in October of last year. SEIU 1021 has filed three unfair practice charges with the Public Employee Relations Board (PERB) since Friday. The proposals they put out in a press release yesterday refer to “every District employee,” but none of these proposals have actually been presented to SEIU 1021 in bargaining.

SCUSD has received an infusion of state and federal dollars. The district now receives over $20,000 per student per year and has a record reserve fund of $125 million dollars. But rather than use available funds and increased state support to retain and recruit teachers and staff, the district continues to propose concessions.

Meanwhile, SCUSD is short 250 teachers, over 100 substitutes, and 400 school staff. Every day, 3,000 to 5,000 students are warehoused in auditoriums or forced to double or triple up in classrooms due to a lack of staffing. Nearly 600 students who have applied for independent study because they are unable to attend school in-person, receive no instruction at all. School bus drivers have been forced to pick up extra routes, cramming students into buses without any social distancing during the omicron wave, exposing them to covid. Instructional aides have been left alone in classrooms trying to write curricula because of the teacher shortage.

“Instead of working to fill the 400 classified vacancies, management is seeking cuts and layoffs,” said Karla Faucett, a professional development specialist who serves as the SCUSD chapter president of SEIU Local 1021.  “Our working conditions are student learning conditions. We’re prepared to strike to ensure that all Sac City students receive the education they deserve.”

“The district’s cynical, bad faith proposal shows that the superintendent and school board are motivated by an agenda to maximize operating profit at the expense of student learning,” said Fisher, who is also a second-grade teacher. “The state and federal governments have stepped up to help schools in this time of need. In stark contrast, Superintendent Aguilar and the school board refuse to act and our students suffer as a result.”

SCTA and SCUSD are scheduled to meet again today, but the district’s breach of the rules of mediation and failure to address the factfinder’s recommendations makes a settlement before the strike deadline look less likely.

“My advice to educators and parents is to prepare for a strike. The district’s actions make it look inevitable,” Fisher said.