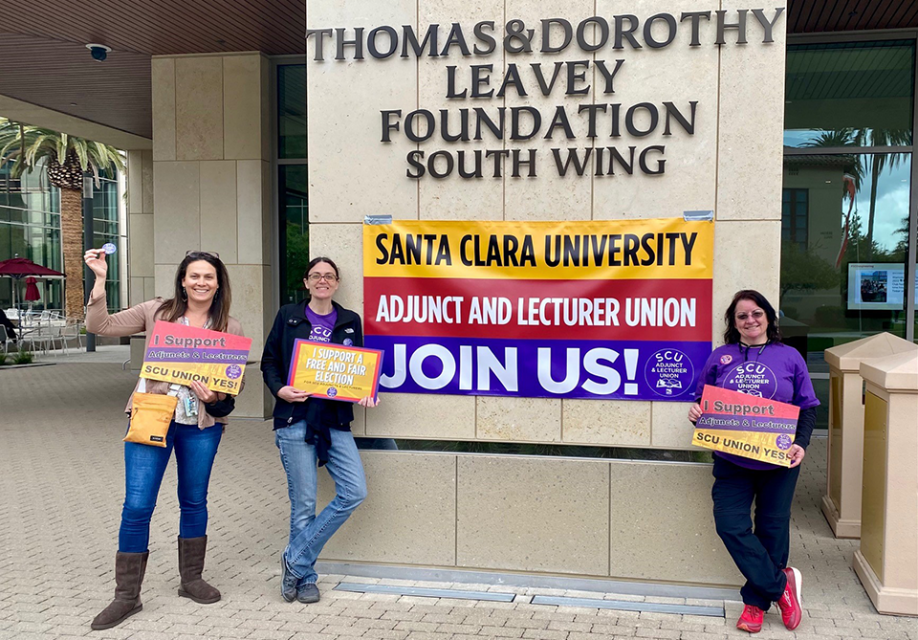 The rising tide of unionization comes to higher education in Silicon Valley, hoping to help fix the “gig-ification” of being a college professor.

Santa Clara, California — On Friday, April 22, 2022, adjunct faculty members and lecturers at Santa Clara University (SCU) filed with the National Labor Relations Board (NLRB), requesting a formal election process to found a union at SCU. The adjuncts and lecturers have been organizing the union since 2017.

“The time is now,” said engineering lecturer Andrew Wolfe, “Given the urgent need for adjuncts and lecturers at SCU to have a say in the decisions that affect us in our work. We’re hired on a per-class basis, and have to re-apply to teach as often as every year. This makes it hard for some of us to live in the Bay Area, and takes time and energy away from our ability to instruct our students.  We’ve seen and been inspired by the thrilling success of others organizing unions across the nation, and are excited to make a real, positive difference here at SCU with our union.”

The organizing efforts have met significant resistance from SCU administrators, including multiple presidents over the years, but many similar small religious schools have seen successful union organizing drives recently, including Fordham University in New York and Loyola Chicago in Illinois. Throughout the process, SCU administration has “agreed we will not seek a religious exemption” to the unionization effort, and previous university President Fr. Kevin O’Brien stated an explicit preference for following the NLRB processthe adjuncts have begun by filing for an NLRB union election.

Maggie Levantovskaya, a lecturer in the English Department, said, “Our working conditions are the students’ learning conditions, and both are in desperate need of improvement. Our union will give the precariously employed adjuncts and lecturers at SCU a voice and help us hold this institution up to its own ideals.”

The Adjunct Faculty and Lecturer Organizing Committee (AFLOC) have worked since 2017 to organize a union to address issues including the corporatization of higher education with so-called “just-in-time” labor practices that created a new class of contingently employed college professors with multiple “gigs”, campus safety, bringing worker justice to the school’s social justice mission, and wages, job security, and working conditions for the non-tenure-track faculty who teach the majority of the university’s courses. The region’s skyrocketing costs of living have pushed some professors into poverty and homelessness.

“We need this union,” says Levantovskaya, “And we have needed it for years. Despite the university’s stated commitment to social justice, we’ve seen huge challenges in our workplace. College instructors are workers and all workers need unions.”

- “preference for the NLRB process”: https://www.scu.edu/kob/in-house-vote-update/

The SCU Adjunct Faculty and Lecturer Organizing Committee (AFLOC) has worked with SEIU Local 1021 since 2017 to organize a union at Santa Clara University.